Donald Kraybill is coming out with a new book about the way the Amish spontaneously forgave the killer after the West Nickel Mines shooting tragedy last October. Kraybill spoke about his forthcoming book Amish Grace: How Forgiveness Transcended Tragedy, and the phenomenon of forgiveness, at the quarterly meeting of the Lancaster Mennonite Historical Society on Monday night. 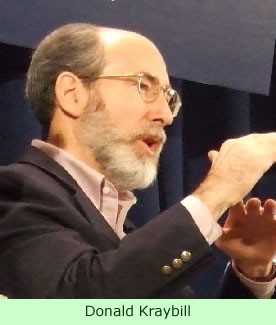 As with everything about the Amish, they are guided by their absolutist belief that they must accept the words of Jesus to the letter. “The Amish follow the Lord’s prayer, which says literally that if you don’t forgive, you will not be forgiven,” Kraybill told his audience at the meeting, held at the Stumptown Mennonite Church in the Lancaster County community of Bird-in-Hand.

Evidently, the Amish people of eastern Lancaster County immediately approached the widow of the deranged killer, Charles Roberts IV, to offer their condolences. One Amish man quickly went to visit the parents of the killer, whom he knew. He hugged the father for an hour to express his sympathy. According to the report in the Lancaster Online news source, Kraybill explained that “the expressions of forgiveness happened spontaneously” among the Amish. There were no strategy meetings, no councils of bishops to plan out what to do.

Kraybill, the author of the acclaimed book The Riddle of Amish Culture, visited 35 Amish families to solicit their reactions to the killings. His entrée into Amish culture in the county obviously allowed him to discuss the tragedy with the victims and their families. He explained that the fact that the Amish are quick to forgive does not mean they are opposed to punishment, or that they excuse evil. Had Roberts lived, some of them admitted, forgiveness might have been more difficult for them. And they would have advocated a prison sentence for him.

The international media that week focused attention on their practice of forgiveness—about 2,400 news stories around the world concentrated on that theme. But this puzzled the Amish themselves. In Kraybill’s words, “A number of Amish people told me that it’s the normal Christian thing to do, just standard forgiveness and ‘everybody does it.’”

The remorse felt by the Amish for Roberts and his family was immediate and genuine. “Can you imagine what it would feel like to be the father of a killer? [The] pain would be 10 times worse than our pain,” said the father of one of the murdered girls. About half of the people who attended the funeral for Roberts five days after the tragedy were Amish, a group which included the families of three of the murdered children. The ones who couldn’t attend were in hospitals with their injured children.

The funeral director at the service for Roberts was apparently overwhelmed by the reactions of the Amish that day. Kraybill told his audience, “These families who buried their children the day before or two days before, greeted Marie, Roberts widow, and her three children and family. The funeral director said, ‘I knew I was witnessing a miracle.’”

Perhaps not a miracle, but simply a good example of a people who act in accord with their very strongly-held peaceful beliefs. The new book, co-authored with David Weaver-Zercher and Stephen M. Nolt, will be published in September by Jossey-Bass, which describes the work in detail on its website.