On January 3, 2008, patrons driving toward a dry goods store in rural Central Pennsylvania paused to stare at a hostile sign posted along a gravel road. “Any Amish trespassing on any Maple Glenn farm Property will be arrested Complements of David Yoder [pseudonym].” James Wolf [pseudonym], the man who signed the posting, obviously has very serious issues with his Amish neighbor. 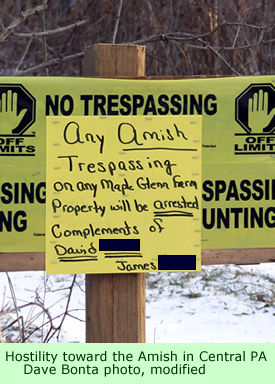 A few minutes later in the dry goods store, the “English” patrons had the discretion to not ask the proprietor about the problems between her brother and the other farmer in the valley. At some point, local gossip will provide clues as to what is going on. But in the meanwhile, the visitors wondered what causes some people to bottle up, and sometimes spill out, hostilities toward their Amish neighbors?

Many “English” (the term the Amish use for outsiders) in this valley harbor misunderstandings about the Amish. “They never have to pay taxes, which isn’t fair,” people say frequently, though completely in error. Or, “they will hunt anywhere they wish, without regard to the game laws”—another canard that is often bandied about. Many people, of course, treasure the local Amish for the superb fresh vegetables and other produce they sell at their farm strands. Some have even gained the privilege of knowing individual Amish people as friends.

But the question haunts: Why do some English people have very positive attitudes toward the Amish, while others are quite negative? A recent journal article by William M. McGuigan and Carol Scholl begins to address some of the basic aspects of contact between the Amish and their neighbors. Their research is based on a settlement in northwestern Pennsylvania.

The basic hypothesis of the authors was that both the social categorization and the contact theories of Gordon W. Allport can be applied to the English/Amish relationship. McGuigan and Scholl suspected that close contacts between the different groups will foster more positive attitudes. That is, the more contact the English have with the Amish, the better they will feel about them. The authors explain that social categorization theory suggests that people have a tendency to categorize others into out-groups and in-groups—them and us. Allport goes on to suggest, in his contact hypothesis, that attitudes of an in-group toward an out-group can be improved through increased contacts.

McGuigan and Scholl provide several examples of research that has been done on the ways that attitudes of the American majority have been affected by increased contacts with minority groups. Evidently, while numerous out-groups have been studied, no one has yet investigated the contact issue between the American majority and the Amish.

Their research method was to have three college students hand people questionnaires at public places in a small college town in northwest Pennsylvania, a community that has about 450 Amish families living in the immediate area. Those families frequently shop and use services in the town. The Amish people constitute about one-fifth of the total population of the area, with most of whom they would have varying amounts of contacts. Of the 100 questionnaires that were completed, 89 could be used and analyzed statistically.

The results of the study suggest the basic reason for a lack of good relations between the English and the Amish people. The researchers found that people who lack much contact with the Amish tend to have negative opinions of them. That may have seemed obvious already, but social scientists like to prove things through their research.

Their analysis goes deeper than that. Their “Attitudes Toward Amish” (ATA) scale, one of seven different measures in their study, was modeled after older attitude scales about race relations, with questions such as “I would like having an Amish family for neighbors,” or “the Amish have an offensive odor about them.” Respondents would answer the questions with numbers that indicate anything from strongly agree to strongly disagree.

The authors prepared other scales, such as a deep contact scale which included statements to agree or disagree with such as, “I have shared a meal with an Amish family.” A superficial contact scale used questions such as “I have had a brief conversation with an Amish person.” The authors included a knowledge index section, in which the respondents were asked to answer questions regarding the Amish and their lifestyle. An example of one of the statements that people responded to was, “the Amish are people who take care of their own.”

Analyses of the results of the different scales point toward the same conclusion—the English who have the most developed contacts with the Amish have the fewest biases against them. Interestingly, while people with deep contacts have more positive attitudes, superficial contacts do not really seem to affect biases that much.

The authors also report that most of the English have very limited knowledge about the Amish. Out of 17 questions in the knowledge section, the average number of correct answers was 3.87, an astonishingly low figure. “This means that the average person in the sample had very little or very inaccurate knowledge of the Amish in their community,” the authors conclude (p.2654). Not surprisingly, the 30 individuals who had the highest scores on the knowledge questions also scored the highest on the deep contact and the superficial contact scales.

None of this, of course, answers what sort of knowledge Mr. Wolf has of his neighboring Amish farmers in Central Pennsylvania. If he would read some good books or articles about them, and as this research suggests, if he would try to get to know them better as individuals, he might be able to modify his prejudices. Mr. Yoder, in fact, is a fine man.