AFP, the international news agency based in France, posted a story on Sunday about the poverty in a Semai village of 300 people in central Malaysia. The AFP journalist was shocked by the conditions in the village, Bertang Lama—a “pitiful scene of hungry children and desperate parents.” Kampung Bertang Lama is near Cheroh, a small town in Malaysia’s Pahang State, two hours drive north of Kuala Lumpur. 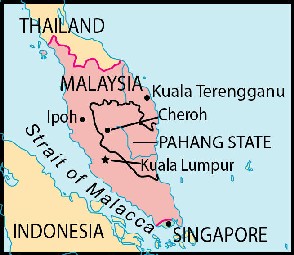 The reporter didn’t mind using colorful prose: “Naked youngsters with the tell-tale signs of malnourishment—bulging stomachs and brown tinged hair—sit listlessly in a hut, while others cling to their mothers as they suckle milk.”

The author briefly examined the reasons for the poverty. The Semai used to live a nomadic existence, subsisting on the products they could hunt or gather from the forest, and they still try to get by in the same way. But most of their forests have been denuded by logging or cleared for rubber and palm oil plantations, so they have little food or cash to spend.

They are seeking recognition of their traditional rights to their lands, plus such basic needs as paved roads into their communities, education, health care, piped water, and electricity.

The AFP interviewed Colin Nicholas, the coordinator of the Centre for Orang Asli Concerns, an organization that advocates for the aboriginal societies of Peninsular Malaysia. Nicholas told the journalist about the Semai role in helping the British rulers with their tracking skills during the Communist insurgency of the 1950s, but, he maintained, the Semai are now viewed as irrelevant to the future of Malaysia. “Come elections, ruling party politicians make promises [to the Semai] in exchange for votes but after that they renege on their words. Because of their small population, they are easily ignored by the government,” he said.

Lim Ka Ea, an official with the Malaysian Bar Council, also visited a Semai village recently, and told the press service that the Semai, and the other Orang Asli societies of Peninsular Malaysia, are now mostly invisible to the majority of Malaysians. The entrenched stereotype is that they do not matter except when they pose for tourists and look exotic.

An 11 year old girl returns to the village from searching for wild vegetables in the forest, carrying a machete. She says that she would like to go to school, but the village did not have one. Most of the village children appear to be malnourished or hungry. They eat mashed manioc, a starch, plus vegetables that they find in the forest.

One man, Yoke Ham, a father of 12 children, tells the AFP that they sell rattan, bamboo, and agarwood, which they gather in the forest, but those plants are getting hard to find. He says that his average monthly income is less than 300 Malaysia ringgit (US $94).

The national government has a lofty goal of providing an uplift service to all communities in Malaysia, but the promises mean little to a young woman in Kampung Bertang Lama, whose three-year old daughter is sick with a fever. “I have no money to buy food and rice for her,” she says. “We have not had our breakfast yet. Life is difficult.”