News stories in recent months about the potentially harmful effects of tourism on the peaceful Ladakhi culture may no longer be very relevant since a mudslide caused tremendous destruction in parts of Leh. The news two weeks ago about flooding and landslides in northern Pakistan and nearby regions of China overshadowed similar events in Ladakh. Reports of events in the capital of the district were confusing at first. 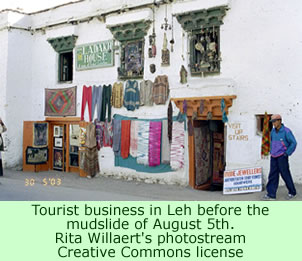 An Asia Times story last week summarized the story effectively. Early in the morning of August 5, just after midnight, an intense cloudburst, a virtual unknown in this high desert region, caused flash floods and monster mud slides to wash down on the city. A wave of mud 20 meters high and several kilometers wide carried away the village of Choglamsar, and roared on down into Leh. Still a couple meters high, the mud washed down the streets of the capital, destroying many of the shops that have catered to thousands of tourists every year for decades.

Hundreds of foreign tourists were stranded, though they were soon evacuated by the Indian military with its helicopters. Both highways into Ladakh from India were cut by the landslides. About 185 people were killed in the tragedy.

According to Vandana Shiva, a renowned physicist and environmental scientist at the New Delhi Research Foundation on Science, Technology, and Ecology, the freakish rains and landslides are caused by global pollution and climate changes. There is no mystery as to what is happening or why.

The Asia Times indicates that about two decades of tourist infrastructure are now buried in mud. According to an AFP story, officials estimate that 70 percent of the tourist structures in Leh have been destroyed, and it will take two to three years to rebuild. But each incoming flight brings more trekkers, eager to head up into the mountains.