The story of the Hutterites is told briefly and simply in a current magazine article prepared for school children who are learning to tolerate others, an essential ingredient in counteracting hatred and violence.

The recent issue of Teaching Tolerance magazine, fall 2010, number 38, points out in the article “A War on the Peaceful” that the Hutterites have been different throughout their nearly 500 years of existence. The brief report indicates they believe in living communally, as the original followers of Jesus did, and that they don’t fight, as Christ commanded. They are very different indeed. The article describes the hatreds and persecutions the Hutterites have faced throughout much of their history.

They migrated from Europe to the United States in the 1870s to escape the intolerance and bigotry of the Old World, only to be confronted by even greater persecution when America went to war in 1917. The Hutterites spoke German, so they were identified with Germany, the enemy in World War I. Compounding the problem, they were—and still are—pacifists. Their refusal to fight in the war their nation had joined prompted intense hostility.

In the rural Plains States, they were hassled and harassed, their farms were vandalized, their neighbors accused them of being cowards. Their young men were inducted into the armed services even though they made it clear they would not fight. They refused to obey military orders or to wear uniforms, so soldiers treated them cruelly. They were chased and beaten. Two young Hutterite men were tortured to death in a military prison in Kansas. 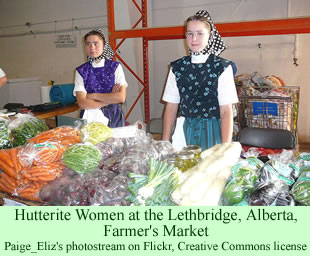 South Dakota forced the Hutterite colonies in the state to close, so they moved to Canada to escape the persecution. The article in Teaching Tolerance does not mention that they have also been subject to discrimination in some of the Canadian provinces due to their different ways of living and their peaceful beliefs.

The article concludes that many people still find Hutterite ways to be somewhat strange. The Hutterites work hard, have few personal possessions, and enjoy less privacy than many others. But they are taken care of by the colonies they live in and their numbers are growing.

Teaching Tolerance magazine is published twice a year, in the autumn and spring, and is available free to educators. It is published by the Southern Poverty Law Center, headquartered in Montgomery, Alabama, which has been working since 1971 to expose hate groups and foster community attitudes that celebrate tolerance and diversity.

Coincidentally, a reader contacted Peaceful Societies last week to alert us to a new website that provides a thorough overview of the three branches of the Hutterites. It is prepared by Hutterites themselves. Called “Hutterite Heritage,” the website covers not only the history of their development as a people over the past 500 years, but it also describes their beliefs, culture, family life, work, education, and much more. A link to this excellent resource has now been added to the Hutterite page in this website.