The Amish in Lancaster County are slowly moving into new business ventures as old ones cease to be profitable, but they have to cope with issues of growth, time, and technology that outsiders often don’t face. The Pottstown, PA, Mercury carried a feature story on Saturday that explored these issues.

The reporter, Eric G. Stark, interviewed an Amish entrepreneur named Elias Beiler, who recently bought a small potato chip company, Zerbe’s Chips, located in a corporate center in the county. His company does not conform to the stereotypes about the businesses that the Amish normally engage in. Mr. Beiler started a framing company, Creekside Builders, in 1993, but that business has been struggling due to the economic downturn. He also realized that, at 43 years old, it might be wise for him to stop climbing around on the rafters of buildings he was erecting.

A year ago he decided to branch out into other businesses. He bought Zerbe’s Chips, and another chip business that came with the deal, and put his brother Ben in charge. He also bought a local restaurant, Tasty Subs Wings & Things, which his wife and four daughters run. Three of his sons help with the construction business. Younger children help out with chores on the 20 acres of his farm that he uses for raising horses, and he rents out the remaining 40 acres of his farm to a cousin.

He spends most of his time drumming up sales for his potato chips in Philadelphia sandwich shops, but he frets over the balance of time he should spend on his businesses versus his commitment to his family. “It is key for me to lead the correct way or my sons won’t listen,” he tells the reporter.

Steve Stoltzfus and his brother Amos are the co-owners of FlorHaus, a Lancaster County flooring and design business. Amos, who is 38, is concerned that the business has been growing too rapidly. While technology changes, he is not sure that he should adopt every new tool. “Sometimes we need to slow down,” he suggests. “It is the way we do business.”

Steve tells the reporter that other Amish have criticized them for using computers, cell phones, and fax machines. Some won’t even venture into their shop because of the devices. He said they both try to hold back on adopting new electronic gadgets, but “you lose out if you hold back too much,” he believes. They try to keep their use of technology as low key as possible, and they respect the conservative ways of their society as much as posssible. It’s obviously difficult.

Amos Glick got tired of building sheds. Ten years ago, at the age of 22, he started building playground equipment instead, particularly swings. His new company, Swing Kingdom, started off in a small building and sold 50 swings the first year. Now he uses a 45,000 square foot facility and builds hundreds per year, which are sold worldwide. His father was initially opposed to the venture, but now he works for him. The young entrepreneur has an outreaching spirit about his company. “It is not that you can afford to take the risk, you just do it. You take a chance,” he said. “As long as you can feed the family and enjoy the work, what else do you want? You have to do it to benefit the community and help yourself.”

The reporter also interviewed Joel Fisher, the owner of an Amish construction company, who started barbecuing chickens last year as his earlier business dropped off. He’s been concentrating on the chickens ever since, selling them at a stand in a parking lot in Leola from around 6:00 AM until 2:00 PM, six days of the week. “Times change, and you have to change with the times or you won’t survive,” he said. 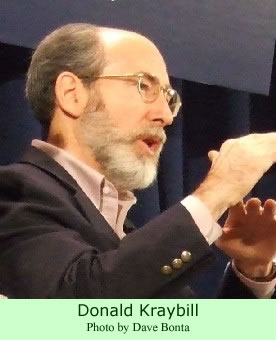 Mr. Stark, the reporter, also interviewed Donald Kraybill at the Elizabethtown College for some information about these changes in Amish enterprises. Kraybill, a famed authority on the plain people, explained that there are now about 30,000 Amish in Lancaster County, a population that will double in 20 years. Traditional jobs are getting hard for them to find. He says that entrepreneurs who have moved into new businesses and adopted advanced technologies have been criticized by other Amish people.

Kraybill said that the Amish will take business risks, but small ones. “They do things in steps,” he says. They have opened farm stands in urban areas like Baltimore and Philadelphia, and they have entered niche markets, such as an organic farmer’s cooperative in Lancaster County. These niche markets allow younger Amishmen to thrive on more modest tracts of land.

Kraybill, with Steven M. Nolt and David Weaver-Zercher, the co-authors of a new book called The Amish Way: Patient Faith in a Perilous World, placed an essay in the Washington Post last week that explores the role of faith in the Amish community. They focus on the price that the Amish have to pay in order to belong in their society.

The authors disabuse outsiders from any romantic notions about being Amish: it’s challenging, demanding, and difficult. They argue that one of the major lessons outsiders can learn from the Amish is that their society is not an easy one to emulate. The well-known symbols—the horse and buggy, the plain clothing, the lack of electricity—are really only superficial markers. “Their way of life is extremely countercultural,” they write, “and practically impossible for outsiders to embrace.”

Seekers who show up in Amish communities and ask to join are politely sent away most of the time. They would find the Amish way of life very difficult. The spirituality that sustains them would be hard for others to adopt: submission to the authority of the church, three-hour religious services, forgoing conveniences because the community decides against them.

The three scholars suggest that the spiritual seeking which engages so many Americans would fill a marketplace with “spiritual wares of all kinds.” They argue that many people have become “religious shoppers,” a process that some observers refer to as the “Walmartization of American religion.” But Kraybill et al. prefer a different image, one of Americans trying to find their religious values at fast food chains: “cheap, quick, and comfortable, but not exactly nutritious.” A contrast to the Amish.