One of the major factors in building any peaceful society is the element of respect, an essential characteristic of traditional G/wi society but one which has been missing in recent negotiations about their future. The New York Times last Friday focused on that issue, at least briefly.

The Times became the latest major news source to pick up on the current controversy about the San societies, the G/wi and G//ana peoples, fostered by Survival International, a British NGO. Last week, SI announced a worldwide boycott of Botswana diamonds in protest against that country’s repression of the San.

SI’s announcement on Tuesday proposed that consumers stop buying diamonds mined in Botswana, and it urged people to not visit the country. The group argues that the government of Botswana compelled the San peoples to leave their homes in the Central Kalahari Game Reserve in 2002 because of the likelihood of diamond mining, and it has been violating their human rights ever since.

After losing a court case in 2006 that affirmed the rights of the people to return to their homes, the government persisted in persecuting them by denying them the right to existing water supplies, and preventing them from hunting. Despite the ban on the G/wi and G//ana peoples having access to water, the government subsequently permitted a tourist lodge to open and allowed it to open a borehole.

SI launched its latest protest against Botswana at the flagship store of De Beers in London over the lunch hour on Wednesday last week. The NGO then posted photos of the protesters. A number of celebrities—Mark Rylance, Sophie Okonedo, Quentin Blake, Joanna Lumley, and Gillian Anderson—joined the campaign by pledging in advance to not wear diamonds from Botswana nor to travel there.

AFP, the international news agency based in France, carried a story later on Wednesday repeating the statements in the SI press releases. The BBC went further in its coverage of the protest. It quoted the Minister of Environment, Wildlife, and Tourism of Botswana, Kitso Mokaila, who dismissed the SI campaign as “propaganda.” He told the news service that diamonds were not the issue. “Survival is on a fund-raising campaign at the expense of a whole people,” he argued. 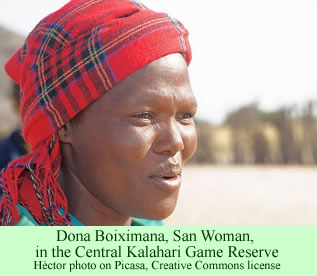 The BBC also spoke with Stephen Corry, Director of SI. He said that the message of the NGO was simple. “What we want to happen is for the government of Botswana to stop treating [the G/wi and G//ana] like third-class citizens and to stop having what is effectively a kind of neo-colonialist attitude towards them.” Mr. Mokaila responded that he did not think the English would want to see their people “living in the dark ages in the middle of nowhere as a choice.” He obviously did not comprehend the idea of people wanting to live on their ancestral land, but with access to minimal necessities such as drinking water and food.

The New York Times joined the media coverage with their own front page story on Friday, May 5, but instead of reporting the SI and government charges and countercharges, the reporter talked with G/wi and G//ana individuals within the CKGR and in the resettlement camps around it. The reporter spoke with a “tenacious” elderly man, Gana Taoxaga, who was just completing a two-day walk to obtain some water.

Three other men, three women, and an infant accompanied him on his trek. He was thirsty, and angry that he had to go so far for water. A borehole, now sealed by the government, was much closer to their homes, but he supposed that officials denied them the use of that water in order to drive them away. “The government says we are bad for the animals, but I was born here and the animals were born here, and we have lived together very well,” he told the Times.

Mr. Taoxaga carried a bow and arrows tipped in the traditional fashion, with poison made from beetle larvae, plus a satchel with his digging stick and a spear. He still tries to use his knowledge of the land to hunt and gather as his ancestors have done for millennia.

Another elderly San man, Pihelo Phetlhadipuo, living in a resettlement camp called Kaudwane, told the reporter, “I once was a free man, and now I am not.” He said if there were a magic way to live in the past, he would choose to go there. Waiting for the food rations of cornmeal, sorghum, sugar, tea, beans, and cooking oil in the resettlement camp, and spending the days and evenings at the makeshift taverns, the shebeens, has little appeal to him.

Moscow Galatshipe, a 43 year old man, said, “there are no jobs. We will all end up in prison for stealing goats.” He is bitter that there is no way out of the resettlement camps. When anyone tries to leave, he says, they are turned back at the gate.

Interestingly, the Times reporter quotes George Silberbauer, the colonial administrator/anthropologist who studied the G/wi and published a number of works about them several decades ago. Silberbauer had argued that probably the best way for the government to treat the San peoples was to respect that most of them would not want to remain museum curiosities. Instead, the G/wi should be respected to make their own decisions as to how much of their past and their traditions they would want to hold on to, and how much of the conveniences of modernization they should accept.

With all of the rhetoric of SI and the counterclaims of the Botswana government, much less the analysis by an anthropologist who wrote an apologetic for the government last year, Silberbauer’s sage counsel appears to have been extraordinarily prescient.