A magazine article last week in The Hindu, one of India’s major papers, describes the health of the natural environment in southern India’s Kerala state from the perspective of a canarium tree growing high in the Anamalai Hills. The authors, T. R. Shankar Raman and Divya Mudappa, scientists with the Nature Conservation Foundation in Mysore, India, explain how major developments of the past year have affected the indigenous people, the Kadar, and the local forest wildlife. 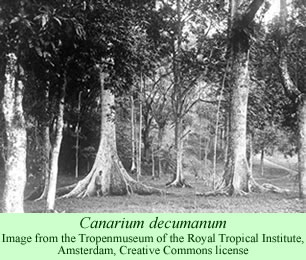 The Canarium, a genus of trees that grows in tropical Africa, South Asia, and Southeast Asia, is a forest giant whose new leaves sprout red against the various greens of the canopy. The flight of a great hornbill through the stately white trees welcomes, in The Hindu article, the new year to the hills and the residents, both human and animal. The individual canarium growing in the Kerala hills thrives on months of drought, followed by periods of monsoon rains, the authors write, and it provides fruits for the hornbills, big birds with huge casques on their bills, which populate the wilderness. The seeds from those fruits feed the small animals of the forest floor.

The first major success of the past year has been the establishment of two new protected areas in Kerala and Tamil Nadu states—the Parambikulam and Anamalai Tiger Reserves. The Parambikulam was upgraded from a wildlife sanctuary to a tiger reserve on February 17, 2010. The authors are hopeful that the management of the new core and buffer zones of these protected areas will succeed, compared to the failures of other natural reserves in the past. Earlier, local people have been excluded from the management of protected areas, but in these two new reserves, the indigenous people—the Kadar—have become actively involved. The plantations and agricultural projects of local communities will now be permitted, and managed, in the park buffer zones.

The Kadar need to be respected for their knowledge of the forests, the authors maintain. Their involvement in research and management of key species, such as the hornbills, is critical for forest protection. The authors hope that the Forest Rights Act (FRA), combined with tiger conservation plans, will prompt the government agencies, civil society, and indigenous groups such as the Kadar to work together to avert the tragedy of forest destruction.

Another development over the past year has been an increase in certification programs, such as the one run by the Rainforest Alliance, which certify the practices of tea and coffee plantations. These programs seek to revive shade tree plantings, avoid toxic chemicals, protect waterways, and assist the forests to survive and thrive.

A third, major development last year has been the decision of Mr. Jairam Ramesh, head of the Ministry of Environment and Forests in New Delhi, to cancel the much-reviled Athirappilly Dam. While it is downstream from the hilly perspective of the canarium tree, it would still have harmed the overall forest ecosystem. When the Minister vetoed the proposed construction project, it was a major victory for the forest and for the Kadar community, both of which would have been devastated by the construction of the dam.

Mr. Ramesh appears, in the opinion of the authors (and presumably the canarium), to be “keen to uphold the environmental laws of the land.” He has changed the ministry from a rubber-stamp to an active advocate for environmental laws. His efforts “have revitalized India’s conservation movement and the dignity of his ministry,” they write.

While the authors see these developments positively, global climate change also threatens the forest, a factor which worries the canarium. The new leaves of the tree flutter red timelessly over the Anamalai Hills, but the authors are both hopeful and worried about the future of the forest and its inhabitants.

The worries appear to be justified. Another article in The Hindu last week reported the public comments on Friday by A. K. Balan, Electricity Minister of Kerala. A long-time advocate of the Athirappilly Dam, Mr. Balan bitterly blamed the central government for the cancellation of his pet project. “The State government had tried its best. But it failed due lack of cooperation from the Centre,” he said.