Jean Briggs’ epochal book Never in Anger focused on a small band of Inuit living on the land just south of the village of Gjoa Haven, in Arctic Canada, and their complete intolerance for any expressions of anger. One day, when some outsiders acted in a disrespectful fashion toward their hosts, the Utkuhikhalik Inuit—Briggs’ friends—she briefly flashed anger at the visitors. Her sudden expression of emotion so upset the Inuit that they ostracized her for weeks afterwards. 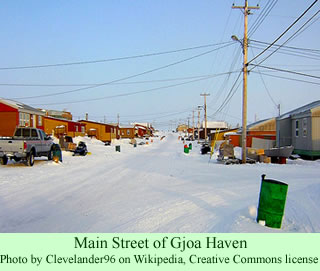 Since Briggs’ Inuit friends often went for supplies to Gjoa Haven, anyone who has been affected by the beauty of her book will notice when the community makes the news—as it did this past week. Gjoa Haven announced that construction will soon begin on a 1,500 square foot visitors’ center, to be completed by the summer of 2012.

Gjoa Haven and the Kitimeot Inuit Association announced that they have awarded a contract to Arctic Canada Construction, Ltd., to design and build the new center. They expect it to showcase the crafts, arts, and culture of the Gjoa Haven region.

Ed Stewart, Gjoa Haven economic development officer, said, “the community is excited. This is something they’ve wanted for a long time and are looking forward to the benefits it will bring.” Nunavut Tunngavik, Inc., has joined Kitimeot Inuit Association in providing funding for the project. The Nunavut Territory’s Community Economic Development fund will provide long term management funding.

Gjoa Haven had only 110 people in 1961, a couple years before Briggs arrived to live on the land nearby with the Utkuhikhalik band. But as the Inuit moved permanently into settled towns over the years, the community has grown—to 1,064 in 2006. The town has a local airport, and a ship arrives annually with supplies.

It was named by the Norwegian explorer Roald Amundsen, after his ship Gjøa. In 1903, his ship became trapped by the ice in the harbor, so he and his men stayed there for two years, exploring locally and learning survival techniques from the Inuit. The knowledge he gained proved important for his successful race to the South Pole a few years later. Some present day residents of the area claim to be descendants of Amundsen or his men.

In addition to the local arts, crafts, and culture, hopefully the new visitors’ center will include a mention of Briggs’ book and its importance to the study of peaceful societies—and the visit of Amundsen and his men.