A periodic census is supposed to maintain the peace among different groups in a state, to make sure that political realities are periodically balanced with population distributions. But sometimes the results are controversial. 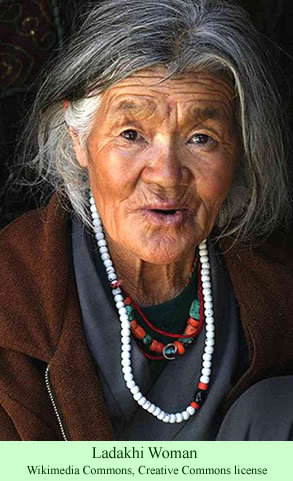 The Leh District of Ladakh was stunned a month ago when the preliminary results of the latest national census of India were released. Leh had the worst gender imbalance of any district in India. In a nation famed for female foeticide, what was going on in Ladakh? In that district, the woman has always had a strong, important position in the home and in society. The figures released by the census department showed that the ratio of females to males had dropped, from 823 to every 1,000 males in 2001, to 583 today.

People in Ladakh were upset, and reacted immediately. Rigzin Spalbar, Chief Executive Councilor of the Ladakh Autonomous Hill Development Council (LAHDC), dismissed the figures. “We are a small population and we know each and every village. There is no gender bias here and female foeticide is non-existent.” He also pointed out that more girls than boys attend schools in the district.

Census officials reacted to the criticism. One argued that female foeticide was picking up in the state. However, the figures from the census seemed to question that. Girls aged 0 – 6 constitute 10.59 percent of the total female population of the district, a far higher ratio than the 6.54 percent of the male population who are boys of the same age. Farooq Ahmad Factoo, director of census operations for the entire state, said that his job was simply to provide the figures, not to interpret them.

From the beginning of the controversy, everyone suspected that there probably were two major factors skewing the population figures so dramatically in favor of males. One is the fact that there is a heavy presence of army personnel in the district, most of whom are men. Those who are stationed in Leh District are counted as residents there at the time of the census. The other suspected cause of the huge discrepancy is the possibility that many more women are studying outside the district, in the major cities of India, than men.

On Tuesday last week, some of the census officials began to modify their positions. Dr. Farooq Pakhtu admitted to the press that the stationing of para-military and defense personnel in Leh District was a major factor in making Ladakh appear to have so many more males than females.

Dr. Sonam Wanchuk, Executive Councilor for LAHDC, provided very different figures for the population of the state. His figures indicate that Leh District has 53,475 females and 51,909 males.

Dr. Rigzin Zora, State Tourism Minister, also disputed the census figures. He argued that women have more power and rights in Ladakh than in the rest of the state of Jammu and Kashmir. “We have women in all spheres of life, including Air Force, IAS, Army and other vocations where males generally dominate,” he fumed.

The various irritated officials might have cited the extensive anthropological literature about Ladakh, such as Norberg-Hodge’s book Ancient Futures: Learning from Ladakh, or R. S. Mann’s The Ladakhi: A Study in Ethnography, both of which describe the strong position of women in traditional Ladakhi society. While polyandry is now illegal, the traditional Ladakhi home revolved around the woman. She held the economic control of the household, and with several husbands, often brothers, she had a dominant position sexually as well.

Despite this latest news, some of the census officials were not about to accept the criticism. They were just doing their job. A news report last Wednesday indicated that Farooq Ahmad Factoo defended the department. “We count the army and the paramilitary personnel as per their presence in an enumeration block. This is standard practice throughout the country,” he told the press. “I am not authorized to pass comments on why the sex ratio is low in Leh. My duty is to record and communicate what the figures confirm.”