Indian film superstar Chiranjeevi championed a Yanadi woman, Tupakula Munemma, over two years ago when he founded his Praja Rajyam party and ran, unsuccessfully, for Chief Minister of Andhra Pradesh. He invited her to run for the state legislative assembly in his party, which she did. 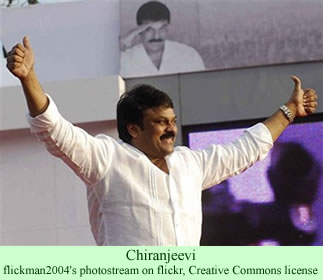 Last week, Chiranjeevi, the film star turned politician—he was elected to the state legislative assembly from Tirupati—decided to visit some of the poor people in his district. He was no longer met with an heroic reception, such as the ones he had become accustomed to in previous years.

He visited the Yanadi Colony in the small city of Tirupati and was mobbed by a crowd of about 100 hostile women, members of a rival political party, the Telugu Desam. A Ms. Pushpavati, a local union official, charged that he did not have a serious attitude about the problems of the people in his constituency. Doubtless these women remembered that the focus of his campaign in late 2008 and early 2009 had been on social justice for the poorest members of the state, such as the Yanadi.

The women said that, although he had visited the Yanadi colony four different times, he had not done anything to improve the facilities there, particularly the drinking water. When the crowd became unruly, police had to clear a way for the actor/politician to leave—reportedly in a huff. Ms. Pushpavati alleged that he was not at all accessible to his constituents. He only visited the Yanadi Colony to hoodwink people and seek publicity, she said.

During his busy day in the city, he visited the urban downtown and other colonies of poor workers. He laid a foundation stone for a drinking water project in one location, and greeted schoolchildren at another. He examined municipal facilities on his tour, including deteriorating roads and poor drinking water systems.

In addition to the Yanadi women, other groups cornered him to complain of their problems: a new tariff system for jeep drivers, problems with a pension plan for retired government employees, and the location of a fish market and slaughterhouse.

After he completed his tour and met with municipal officials, Chiranjeevi announced to the media, which did follow his movements, that short term and long term measures were going to be taken to correct the drinking water situation in Tirupati. He said that he was trying to address the water problems with the Chief Minister of the state, Mr. N. Kiran Kumar Reddy. He promised a new building and a budget of 70 million rupees (U.S.$ 1.5 million) for a proposed water project.

Tupakula Munemma, meanwhile, has started a blog, partly in English and partly in Telugu, which includes some photos of herself and other Yanadi people.