October second marks the fifth anniversary of the horrifying shootings in the Nickel Mines, Pennsylvania, Amish schoolhouse, a tragedy that focused the attention of the world not only on another mass murder but also on the practice of forgiveness. Millions of people had a hard time believing that the Amish people could so quickly forgive the killer and his family. 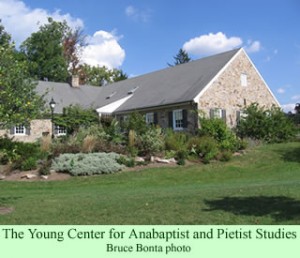 The Young Center for Anabaptist and Pietist Studies, at Elizabethtown College in Elizabethtown, PA, will commemorate the anniversary on Thursday, September 22, with a one-day conference from 8:00 AM to 4:00 PM that is now open for pre-registration. The title of the conference at the Young Center will be “The Power of Forgiveness: Lessons from Nickel Mines.” It will be aimed at professionals who deal with issues for which forgiveness can be an essential strategy, such as pastors, therapists, and counselors.

Using the events of five years ago as a springboard, a number of speakers will focus on issues related to forgiveness in the contemporary world. Only about a third of the conference will deal with the events of October 2006—the rest will be a more general conversation on forgiveness itself. Donald B. Kraybill, senior fellow at the Young Center, will give the opening presentation, “Forgiveness in the Face of Tragedy: Five-Year Lessons.” His paper will distinguish between forgiveness, reconciliation, justice, pardon, and grace.

L. Gregory Jones, a theology professor at Duke University, will present the keynote address, “Habits of Forgiveness: Shaping Contexts for the Hard Questions.” Following his speech, David Weaver-Zercher, a prominent scholar on Amish studies and a professor of religious history at Messiah College, will add his comments to the presentation by Prof. Jones. The two scholars will then conduct a question and answer session.

The afternoon will feature five concurrent sessions, when various speakers will discuss topics relating to forgiveness, such as domestic and sexual violence. Frank Stalfa, a professor of pastoral theology at Lancaster Theological Seminary, will present a talk titled “Forgiveness without Reconciliation: The Four Station Approach.” He will point out that reconciliation and forgiveness are quite separate issues—the second does not necessarily follow the first, but they both have a role to play in healing.

Linda Crockett, who is the director of the consultation and education programs at the Lancaster Samaritan Counseling Center, will discuss quick forgiveness and how it can hinder healing. Forgiveness, especially in cases of sexual abuse, must not be framed as an alternative to justice. In cases of abuse, mandates to forgive can actually pose a barrier to healing, she will argue.

Steven M. Nolt, a professor of history at Goshen College, joined by Kraybill and Weaver-Zercher, will discuss the problems they had when they researched and wrote their book Amish Grace: How Forgiveness Transcended Tragedy, which was published late in 2007. (See a review in this website in July 2008). In a presentation titled “Writing the Story of a Tragedy: Ethical and Practical Challenges,” the three authors will discuss the sensitive issues and ethical complications they faced. They will also reflect on the subsequent television film “Amish Grace” and how they dealt with the filmmakers.

Maria Erling, professor of church history and mission at the Lutheran Theological Seminary in Gettysburg, will talk about a service in Stuttgart, Germany, in 2010 at which the Lutheran World Federation asked for (and were granted) forgiveness from Anabaptists for the persecutions they suffered nearly 500 years ago. Erling will lead a discussion about how acts of repentance can help forge new relationships among people and their churches.

Kenneth Sensenig, assistant director in the East Coast regional office of the Mennonite Central Committee, will give a presentation titled “The Worldwide Witness of Nickel Mines.” He will cover the role of the MCC, which acted as a bridge between the public and the Amish community during the days after the tragedy at the schoolhouse.

An interesting feature of the conference will be a session when Terri Roberts, the mother of deranged killer Charles Carl Roberts, IV, will be able to present her own, personal experiences. Her topic, “My Journey with Forgiveness,” will discuss, in the words of the program, “how being forgiven can offer spiritual power for reconciling and building vibrant new relationships with those who’ve been harmed.” Professor Nolt and Mrs. Roberts will reflect on what the tragedy has taught each of them about forgiveness and reconciliation in the five years since the murders.

According to the press release from the college, the deadline for registering for the conference will be on September 8. A public program at 7:30 in the evening of September 22, “The Enduring Power of Forgiveness,” will be free and open to all visitors. A special exhibit, “The Tragedy at Nickel Mines: A Story of Forgiveness and Reconciliation,” which traces global media coverage of the tragedy and forgiveness, will be on display in the Young Center from September 8 until December 9.