Three months after some Schwartzentruber Amish lost their case in the Kentucky Court of Appeals, they were sentenced to jail—for refusing to overlook their religious beliefs and mount orange triangles on their buggies. The story about a Graves County, Kentucky, judge putting people in jail for their religious convictions made international headlines. 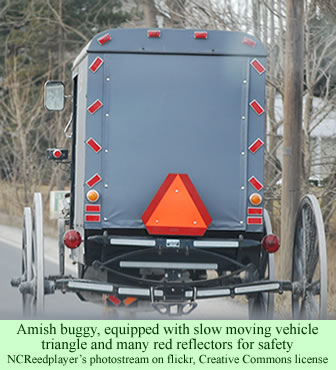 The issue began three years ago, when a group of Schwartzentruber Amish men in western Kentucky were convicted of a misdemeanor in a lower court. They refused to abide by regulations that required them to mount garish, bright orange, slow moving vehicle triangles on the backs of all their horse-drawn buggies when they were traveling on public roads. Other Old Order Amish are quite willing to use the safety triangles.

The ultra-conservative Amish group argued that their religious beliefs in modesty forbid them from using the bright signs, though they expressed a willingness to use other, less colorful, warning devices. The state refused to compromise. The Court of Appeals agreed with the state’s assistant attorney general, who had argued in court that it was not so much an issue of religious freedom as one of public safety.

Last week, it was finally time for the Amish to face the consequences of their beliefs. Nine men faced Judge Deborah Hawkins Crooks in her courtroom. The courtroom was packed with Amish people. All were ready to go to jail for their beliefs. The judge told Moses Yoder that he owed $158.00 in court costs and fines. “Mr. Yoder, do you intend to pay that amount?” she asked him. He quietly shook his head. Paying the fine, the nine men say, would show that they agreed with the law, which they feel violates their beliefs.

The judge sentenced him to four days in the county jail. The eight other men were similarly sentenced to between three and 10 days in jail, depending on the amounts of the fines they were refusing to pay. Their fines ranged from $148 to over $600.

Levi Zook commented that he did not think it was fair to put people in jail for adhering to their convictions. “But that’s what we’ll do if that’s what it takes to abide by the biblical laws,” he added before the hearing began. In fact, a friend of Mr. Zook’s paid his fine for him in order to help him out, because one of Zook’s children is ill with cerebral palsy. The other eight men reported to the county jail.

Judge Crooks indicated that sentencing the men was not her favorite thing to do, but she said she did not have the option of picking and choosing the cases she would hear. She expressed the hope that it was time to move forward. She said that there are 44 other cases involving the same charge on her docket at this time, and she set trial dates for a number of them. Some of those cases include the same men just sentenced to jail. The nine Amish men have appealed to the state Supreme Court, but that court has not yet decided whether it will hear the case.

Ananias Byler, an Amish man who is waiting for his own trial on the charge of not using the safety triangle, said he was more than willing to sit in jail rather than violate his beliefs. William Sharp, an attorney from the American Civil Liberties Union of Kentucky who has been defending the Amish men, expressed his disappointment at the course of justice in the state. He had been arguing that the case should be delayed, pending the outcome of the appeal to the supreme court.

When the men reported to the jail, their request that they be allowed to wear their own, traditional dark clothing was denied, but the jail had secured conservative, dark jump suits for them, so they would not have to wear the standard issue, bright orange jump suits that other prisoners are required to use.

The next day, Jacob Gingerich, a 39-year old farmer, woke up for the first time in his life in a place where he was unable to see the sunrise. He spoke to a reporter in the jail’s visitor center about the night he and the other seven men had spent on mats in a windowless common room. “I feel like I’m in a place where I don’t need to be,” he said. But he added, “we’re going to stand up for what we believe.” The men had spent the night in prayer and rest.

Dressed in his grey jumpsuit, he expressed appreciation for the jail officials who had secured the conservative colored garments. He spoke of his problems with being in jail. He has some tobacco that needs to be harvested, and while a couple of his sons can help, the rest are too young and are in school. As soon as that chore is done, he said, he needs to start harvesting some corn.