Shary Boyle, a visiting artist at Concordia University in Montreal, gave a presentation last week on campus during which she spoke about her three-week visit in the spring to the Inuit community of Cape Dorset. The students may have expected her to focus on her own paintings, drawings, and sculptures, but she chose to discuss the art works of the Inuit, according to an article in the student newspaper. 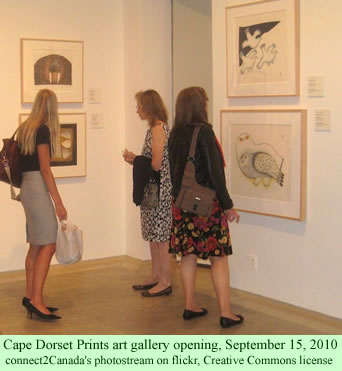 Boyle indicated that the small town, on the southern coast of Baffin Island, is “the last frontier of the untouched.” She said that despite the isolation, the Inuit of Cape Dorset are able to maintain their strong sense of community. She said, however, that the people have a hard time maintaining a viable local economy, and the traditional subsistence lifestyle is gone. The government does not provide enough assistance, she added.

Most of the people in the town are unemployed and passive. “They don’t fight, they don’t speak about bad things, they don’t have the courage to do it,” she said. Without a lot income sources, the people of Cape Dorset have turned to producing art works for sale. As a result, the town has become a leading center for printmaking and carving.

The Baffin Eskimo Co-op in town, organized in 1959, was the first organization to promote Inuit art in the Canadian Arctic. Today, Cape Dorset has a stone cutting and graphic arts center, a multi-million dollar community business.

Boyle suggested that art works showing the darker side of life in Nunavut—alcohol, drugs, violence, abuse, poverty—simply don’t get sold. Boyle would like to see a museum established in Cape Dorset to show all the unsold works. It would help reveal those hidden facets of life in the north, and contrast the ideals of the Inuit with their more stressful realities.

While she was visiting Cape Dorset, people would come and watch her work, quietly exchanging feelings through the medium of shared artistic expressions. Despite the troubles in the community, the Inuit—and Boyle—epitomize the way artists can articulate the struggles of existence, according to the newpaper.