Juan Santiago, a young Zapotec leader in central California, believes that traditions of community service, which are so important in the villages of Oaxaca, need to revived among the immigrant communities in the Golden State. 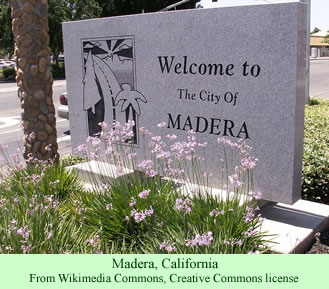 Although the Zapotec migrants used to be able to cross the border and return to their home villages in Mexico to celebrate their major festivals, increased border security has made this very difficult. So they are starting to celebrate their festivals in Madera, a city in the San Joaquin Valley and home to many Zapotec people.

After Christmas last month, for the third year in a row, Mr. Santiago and the other local Zapotec leaders organized a festival to honor St. John the Evangelist, the patron saint of Coatecas Altas, the town in Oaxaca where many of them come from. Zapotec people from across California and from as far away as Oregon and Washington visited Madera to help celebrate the saint’s day. The festival coincided with the one being held in the town in Oaxaca.

Santiago, a 23-year old student at California State University in Fresno, started the festival as a way of helping organize the Zapotec people. Most of his own family are farm workers, and he is the first to graduate from high school and to attend a university.

Sara Lara Flores, a sociologist at the National Autonomous University in Mexico, said that before the 1980s, the Zapotec migrated to the Los Angeles metropolitan area to find work. But in recent decades, the Zapotec have migrated farther north, to the central California farms to get field work.

Out of the 61,416 people in Madera, according to the 2010 census, 47,103, or 76.7 percent, are Hispanics. The Zapotec people, about 5,000 in the city, have a double language barrier: they have to learn both Spanish and English, in addition to their own native Zapotec. Young Zapotec people are born into poverty, have little opportunity to get an education, have few opportunities since they have no legal papers, and are often paid less than other workers.

After calling the first Zapotec meeting in Madera and being elected president of the group, Juan Santiago argued that community work should give their young people something positive to do. It encourages leadership and is generally productive for them, he feels. Flores agrees that community service is an essential ingredient for the health of the immigrant community.

The celebration of the saint’s day last week was part of that effort. Flores commented, “this celebration allows for the ties of solidarity and mutual help that characterize indigenous people to be reinforced. It helps them face the atmosphere of hostility and intolerance that many encounter.”

The day started with over 1,000 Zapotec attending mass. The festival then included a basketball tournament, a run from Madera to Fresno (about 22 miles), and a variety of activities in a rented hall at the Madera Fairgrounds. There they prayed, lit candles, and placed bouquets of flowers in front of an image of St. John the Evangelist—which was made to look just like the one in Coatecas Altas.

Giant paper mache dolls danced around the hall under a ceiling decorated with banners hand cut into elaborate designs. Everyone received cups of tepache, a fermented pine apple beverage, and plates of mole. To conclude the festivities, Santiago handed ceremonial staffs to newly elected members of the steering committee who will exemplify community service for another three years.