Kidder and Hostetler wrote a memorable article 22 years ago that discussed the Amish approach to working things out with local bureaucrats, thus liberating officials from their need to obey all the rules. A routine announcement last week in a local Pennsylvania newspaper—that some Amish want to build a school—prompts the reader to remember the scholarly research. 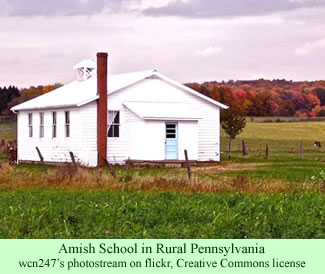 The issues mentioned in the news story are comparatively minor. Ones that can be worked out; compromises that can probably be reached. At least, that’s the tone of the news report. The issue is that near Myerstown, in Lebanon County just to the north of Lancaster County, the Amish have applied for a permit to build a school, to be located at the southern end of Golf Road, near the intersection with PA 501.

A local surveying and engineering company, Matthew & Hockley Associates, represented by R. Scott Carpenter, applied to the Jackson Township Supervisors at their meeting last week for an exemption from the township’s water and sewer ordinance. The Amish want their new school building to have privies rather than indoor bathrooms. They also do not want running water on the site. The children would bring their own drinks from home.

Tom Houtz, Vice Chairman of the Board, asked if a stipulation could be attached. If the board decided to approve the request and the building would subsequently be sold to another party, then the exemption would expire. The township solicitor, Paul Bametzreider, read the relevant ordinance, which states that, if a proposed building is built within 150 feet of a source of public water, it must be connected to that water system, once the builder is notified of the ordinance.

“So if the notice is never received from the township, then it wouldn’t be required,” the attorney added. One can imagine him winking as he said that. Finding creative ways of allowing the Amish to get around local ordinances is part of the culture of southeastern Pennsylvania, to judge by Kidder and Hostetler.

One of the supervisors, Clyde Deck, expressed concerns about the lack of fresh water on the site. An Amish man attending the meeting, who did not give his name, said that at another school in the township, the children and the teacher wash their hands in collected rainwater, and they bring their own drinks with their lunches. Gene Meede, the township zoning officer, told the supervisors that the project would also need a variance from the zoning ordinance due to the simple fact that a school would not be permitted in what is presently zoned as an agricultural district.

Since the article in the Lebanon Daily News does not indicate that the supervisors took any action, one can presume they delayed making a decision. The interesting point about the report is the attitude of the township attorney—his publicly suggesting a creative approach to finding a way for the Amish to get what they want without violating the letter of the law.

The article represents a contrast to news reports from other parts of the U.S., where local officials and attorneys are much more intent on making sure that the Amish adhere to the strict letter of local law. Numerous news reports last fall covered conflicts in Western Kentucky over the refusal by members of the very strict Schwartzentruber Amish group to put orange safety triangles on their buggies. Several Amish men were sentenced to jail due to their religiously inspired obstinacy.

The issue keeps coming up, as judges in Kentucky continue to sentence more and more Amish men to jail over the issue. One news report about the safety triangles a couple weeks ago indicated that other states are finding ways to compromise, but apparently western Kentucky officials refuse. Their approach, enshrined in their laws, is the only way forward. Perhaps in this respect, southeastern Pennsylvania needs credit for its culture of finding creative compromises with the peaceful minority society.

Of course it helps, as Kidder and Hostetler point out, that the Amish represent hundreds of millions of dollars in tourist revenue to southeastern Pennsylvania. Bureaucrats are inspired to be creative because of the remote, but very real, possibility that they can’t hassle the Amish too much or they just might all sell their farms and move to another rural section of the continent. They might.