A new post on a Paliyan blog last week proudly described the peaceful structures in their society, but it warned that their peacefulness, combined with their shyness, has increased their vulnerability to being exploited by corrupt outsiders. 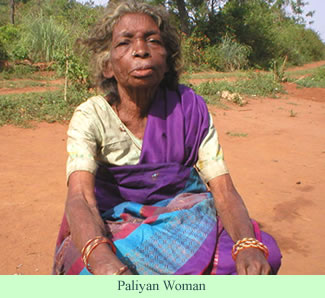 Using the pluralized form of their name from the Tamil language—one Paliyan, many Paliyar—the new post claims proudly that the Paliyar have a lot to teach “the so called ‘Modern World’ from their traditions.” The statement argues that their hunting and gathering subsistence lifestyle is the reason that they take extraordinary care to protect the forests and wildlife.

They believe that everything has a right to life. Their values about nature extend to their own survival. They do not store surpluses, and furthermore, they do not even try to make a profit from them. The Paliyar “have a modest living with minimum needs, very simple and straight forward in their thought process, find no reason to acquire in abundance when there is enough for their need and they respect ecological democracy ….”

The blog, which has not posted anything from September 2010 until January 2012, appears to be closely linked to a Paliyan website, the Collective Action for Forest Adivasi in Tamil Nadu (CAFAT). They both post some of the same pictures and similar, if not identical, information in English. The authors, who remain anonymous, clearly want to reach out to a wide audience with their ideas and information.

The blog post describes the physical features and habitat of the Paliyans. It reports that some of them still subsist in the interior forests, in huts made of sticks and grasses, rather than living in the plains in closer association with the Tamils. The ones in the plains cultivate some crops, but, the story suggests, they still do not store surpluses. They have been forced, due to the construction of dams in their forested lands, to move into the plains and take jobs in order to survive.

The article outlines the goals and objectives for the CAFAT organization. The primary goal of the organization is “To Build Adivasi Paliyar Movement in western Ghats Region of Tamil Nadu.” Adivasi is the word used in India for the aboriginal peoples of the subcontinent.

The objectives of the group are to protect the rights of the Paliyan; to ensure that they have the continuing permission to collect and use minor forest products; to guarantee them the right to manage their forest lands; to preserve and safeguard their traditional culture, community resources, and “customary mode of dispute resolution”; to foster dialog with non-Adivasi peoples of India; and to document the cultural heritage of the Paliyans.