An ANI reporter, Chetna Verma, visiting Leh 18 months after a mudslide disaster, wrote last week that “it was the traditional lifestyle and belief systems of the Ladakhi community [as well as] their humane quality” that helped them get through the tragedy. She argued that the Ladakhi spirit of mutual assistance was essential. 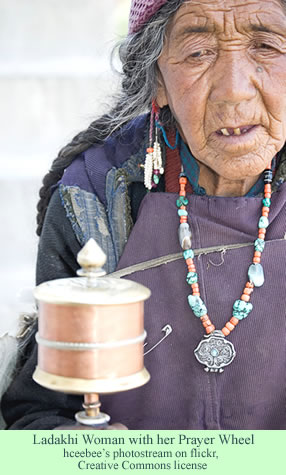 One of the volunteers after the disaster told the reporter that the way the Ladakhi people cooperated with all the trained rescue workers “was a crucial factor behind the success of the emergency relief.” The joie de vivre among the survivors was apparently a highlight of an otherwise very tragic situation. In one group of survivors, who had rushed up to a promontory because of the threat of another rainstorm, the Ladakhi women started singing folk songs. Then, holding their prayer wheels, they broke into the Buddhist chant Om Mani Padme Hum to keep up their spirits.

The report from the prominent South Asian news service described the way Leh has recovered from the sudden mudslides of August 5, 2010, which destroyed parts of the small city and surrounding villages. Ms. Verma took note of the Ladakhi people “celebrating life with enthusiasm and characteristic hard work” as they rebuild their city.

She commented on the still visible scars of the mudslides and on the slow progress of the rebuilding that is taking place. She noticed large expanses of open land filled with rocks and mud, plus broken houses and the remains of buses and cars.

The secret to the successful rebuilding so far, she argued, is in the fundamental values of the Ladakhi people. They have a strong belief in community efforts, such as preserving their natural and cultural heritage, so they see helping one another rebuild as part of their duty toward humanity. They are justly famed for their hospitality toward visitors, which reflects their ethical values.

She gives many examples of their willingness to help one another, such as people who provided lodging, medications, and food in their homes to victims of the devastation, without compensation. People helped dig out others. Youths volunteered in hospitals, offering to pitch in without any formal training. Some grabbed shovels and helped dig out victims. People did what they could in the relief camps and community kitchens. The army and the border police forces also provided invaluable assistance.

Local people formed coordinating committees to handle the donations coming in and to help organize relief work. These local groups distributed funds to the families in greatest need, as well as medicines, food, and clothing in the relief camps.

The government provided three to four bulldozers to each of the rural communities whose fields had been covered by infertile mud and rocks, so the villagers could clear the land. The farmers have worked hard to restore the productivity of their fields. They are not back to normal yet, but the people are determined to resume their normal cropping. The women are back to working in their fields. Life is getting back to normal in the Leh area.