Teachers in the Inuit schools in Nunavut traveled to the capital, Iqaluit, last week for a five day conference about the issues relating to educating the young people of the territory. About 600 teachers were expected to crowd into the town, taking up all the available 247 hotel rooms and then some. 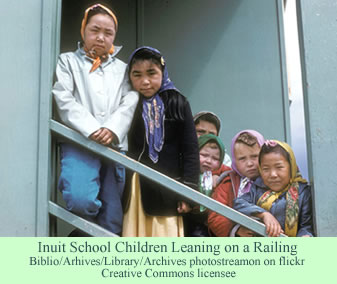 Nunavut Premier, Eva Aariak, spoke to the teachers on Tuesday, Feb. 14th, urging them to try and bridge the divide between Inuit traditional culture and the needs of the contemporary world.

Aariak is also the education minister for the territory, and is, herself, a former teacher. She acknowledged the problems of teaching in the territory, such as the graduation rates, which are “unacceptably low.” But she also urged the teachers to remain aware of “the progress that is being made,” such as the increase in grade 12 enrollment. It has grown 120 percent during the 13 year existence of the territory.

The premier expressed pride in the fact that their education system was developed in Nunavut. She also commented that the broader curriculum in the schools gave students more options. “We want our young people to have every opportunity for post-secondary studies and for work as any other Canadian,” she said. “Nothing less.”

She expressed a commitment to making sure that every Inuit child has a chance to become fully proficient in one of the Inuit languages and in either English or French by 2019. This goal will be reached as more Inuit teachers, counselors, and support staff are trained in the requisite language skills and subject matters.

The teachers “are key to bilingual education and delivering more courses in the Inuit Language throughout the territory,” Aariak said. She also suggested that having bilingual child care facilities, where both the Inuit languages and English or French are spoken, will help. Three-quarters of the communities in Nunavut already have such facilities.