A depressing story early last March about a three year old albino Fipa boy being kidnapped from his grandmother’s home near Lake Tanganyika in Tanzania had a surprising, but happy, ending last week. The little boy was found safely, though the news had not gotten out for a year, probably to protect him. 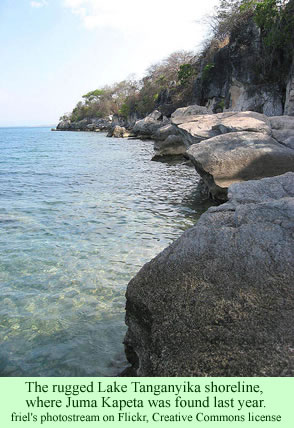 The story last March was that the three year old boy, Juma Kapeta, was playing with his five year old sister, also an albino, in the yard of their grandmother’s home with other children in Itunya village, the Mapanda District of Rukwa Region, near the shore of Lake Tanganyika, when an unknown person approached. He beckoned Juma over, then grabbed him and fled.

Albinos carry a high value in some parts of Africa due to the sale of their body parts for witchcraft purposes. The grandmother was not monitoring the play of the children. The absence of the little boy was not noticed by the other children, and it was not reported until evening, according to last year’s story, when the parents returned. The police mounted an intensive search along the shoreline of Lake Tanganyika, reportedly without success.

A news story last week from Tanzania updated what had happened subsequently and provided the happy ending. It also gave details that were not included in the earlier story. Apparently Juma, and his older sister Wande, were living with their grandmother when the incident occurred.

According to Ms. Naomi Nko, the Mapanda District Education Officer, the searchers ultimately did find Juma in a wooded area along the lakeshore during their intensive search. Police were joined by villagers and members of the Tanzania People’s Defense Forces in the effort. The boy was found in a heavily forested area not far from Itunya. He was taken to the hospital, where he was found to have malaria.

He also had a variety of small cuts on his skin, probably from a razor blade. Such cuts are made by traditional healers and witchcraft practitioners. According to Ms. Nko, “we believe that whoever had abducted the child was scared by the scale of the search. The search party was huge. It scoured the entire area along the Lake Tanganyika shoreline.”

Ms. Nko indicated that the little boy and his older sister were too young to go to school, so they were removed from the home of the negligent grandmother and placed at the St. Martin de Pores orphanage in Sumbawanga, where they could be more closely protected.

The whole story reached the attention of the media last week when the wife of the Vice President of Tanzania, Mrs. Asha Bilal, accompanied by the Rukwa Region Commissioner, Ms. Stella Manyanya, visited the orphanage for a tour. Juma was one of the residents lined up to shake hands with the visiting dignitaries. His sudden appearance in his secure shelter brought many curiosity seekers to see him and to enjoy the happy ending to the story.