Persecuting the peaceful Amish has not been good for the image of Kentucky, but fortunately, last Wednesday, the state finally resolved the contentious safety triangle issue. Governor Steve Beshear signed a bill that allows the Schwartzentruber Amish to use strips of reflective white or silver tape on their buggies rather than the florescent safety triangles that so deeply offend them. 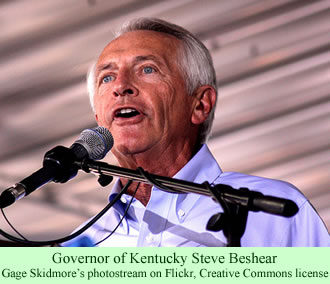 The Governor said, “I think we were able to fashion a solution that helped folks with their religious issues but at the same time still maintained the standard of safety that we have to have on our highways.”

While most Amish groups have no problems with displaying the orange safety triangles on the backs of their buggies, the ultra-conservative Schwartzentrubers do. They feel that the triangles represent the holy trinity, which their beliefs forbid them from displaying. Furthermore, they are religiously opposed to any show of loud colors, and the point of the florescent orange triangles is to be highly visible, especially at night.

Several Schwartzentrubers had been sentenced to brief jail terms for their refusals to mount the safety triangles on the backs of their buggies. They claimed it was a religious issue for them.

As of mid-February, the focus of the news was on a compromise working its way through the legislature. The Kentucky senate passed a bill authorizing the Amish to use strips of reflective tape instead of the triangles. It awaited action in the state house of representatives.

Before the house could take action, a court case challenging the existing law finally made it to the state Supreme court, which held a hearing in the middle of March. As with the debates in the legislature, the court heard arguments about religious freedom versus the safety of motorists and Amish on the public roads. Some Amish decry the notion that the law requires them to entrust their safety to a human symbol—the triangle—rather than to God.

On Tuesday March 27th, the House and Senate reconciled their different versions when the House passed the Senate bill, sending it to the governor. His signature hopefully brings an end to the issue—at least in that state.