“A few chickens have been killed and the dogs chased some cattle, which were grazing in the village,” Conrad Glass reports, describing a typical day in his job as the policeman of Tristan da Cunha. Investigating a complaint relayed by the village vet, the officer wrote that he was able to identify the persons who owned the dogs that were chasing the cows, and he gave them a verbal warning. 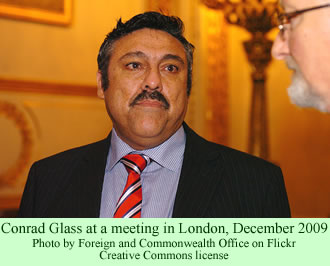 Glass also suspected who owned the dogs that were chasing the chickens, but he couldn’t prove it. He expressed a bit of annoyance that, on a small island where everyone is related to everyone else, details about such mischief and minor problems are withheld from him for fear of upsetting family and community relationships. Glass does what he can: he posts a public notice about the incidents.

The rest of his day is busy, but equally mundane. Acting in one of his additional roles—as customs officer for the island community—he goes out on a small boat to board a visiting ship, where he retrieves a diplomatic mail pouch and the passports of visitors who will shortly be coming ashore.

After lunch, he drives around on patrol in his police car. He watches for reckless drivers, whom he has sometimes had to stop and warn about their driving. He then drops in at the village school to talk to the students about the need for careful driving, and the importance of having functioning lights on their bicycles. He then goes to the supermarket to order some front bicycle lights to give to the offending, and embarrassed, kids. He concludes his day at his office, writing reports and sending emails to English colleagues.

He’s finished work at 4:30, but his day is far from ended. Along with a colleague, he takes a youth group on an evening outing, a barbecue (called a “brai” on Tristan) out on the beach. He and his adult colleague organize games for the kids and start the barbecue. As it gets dark, he finishes the evening by telling them some ghost stories.

Readers who might be hoping to find true tales of crime-busting adventures will be disappointed by Rockhopper Copper, published first in 2005 and revised five years later for a 2011 second edition. The peaceful island community obviously has its stresses, but Glass frequently emphasizes the good-natured badinage that everyone uses to overcome their tensions. An article in The Guardian about Glass in January 2010 indicated that the only incident of violence in recent memory was a fight that occurred on a visiting fishing vessel—back in the 1970s. His job as policeman is more one of helping people resolve conflicts than of solving crimes.

His narrative covers many aspects of not only his own work, but also of other aspects of life on Tristan. One of the hats he wears is as conservation officer. He makes it clear that the Tristanians are proud of the avian biodiversity on their group of islands. Inaccessible Island, about 25 miles southwest of The Settlement on Tristan, and Gough Island, about 220 miles south, are critically important seabird sanctuaries. Glass describes his work counting rockhopper penguins (hence the book’s title) and their successes on their nests.

Many details about Tristanian social life come out in the course of his descriptions of activities that he participates in. During a day spent up on the mountain getting sheep into pens, he notes that the branding is necessary so people can distinguish their own property from that of the other islanders. He doesn’t wax on about private versus public property, but the glimpses of social conditions are useful, and quite interesting.

In the same vein, he participates, along with other island men, in a trip with numerous boats to Nightingale Island. The purpose of the trip is to check on the shacks that they maintain on the other island, to find wood, and to gather guano to fertilize their gardens. As a side benefit, the reader learns about the good-natured competition that exists among the various boat crews to see who can get to Nightingale first—a distance of 24 miles to the south. Tristan is the only inhabited island in the group, other than a weather station on Gough Island.

Glass treats us to some tales of search and rescue ventures—one of his duties is taking charge of those operations. He tells the stories in a matter of fact fashion, but the lack of any kind of support by aircraft means that anyone who has a serious problem on land or sea is dependent for help on the efforts and manpower of the islanders themselves. He also relates a number of charming folk tales.

The details in the book suggest a rich tapestry of life, even if the island is incredibly isolated. He describes a hurricane that swept over Tristan in May 2001. As the winds grew stronger and stronger and were starting to rip roofs off of buildings, Glass and others worked feverishly trying to save people’s property from the raging storm.

But the best part of the story is the way everyone pitched in to help family and neighbors protect their properties and make sure they were safe and secure during the stormy night. It is instructive to read about the spirit of cooperation that prevails in Tristan, but even better to read an eye-witness, participant account such as this, where the howl of the wind and the fright of the people is tempered by the strong community that helps protect them.

Glass, in the conclusion to his volume, is concerned about the future. The island, particularly its harbor, costs a lot to maintain. The catch of the crayfish and the work at the fish factory are essential to the economy of the island. The author is nervous about the continuing viability of the fishery.

He also worries about the introduction of alcohol and what it is doing to the isolated society. But he still takes pride in the safety, security, and freedom from fear on the island. No one locks their doors. “Children can play without fear of being molested,” he writes. It’s nice to know that peaceful spots like Tristan da Cunha still exist.