Nearly ten months ago, a surprise landslide buried three homes in the Semai community of Sungai Ruil, killing seven people. The government of Malaysia reacted with compassion and promptness, but questions remain about the causes of the tragedy. The landslide occurred during the evening of August 7, 2011 just a few km. above the major resort town of Tanah Rata in the Cameron Highlands of Malaysia. It was widely reported in the news. 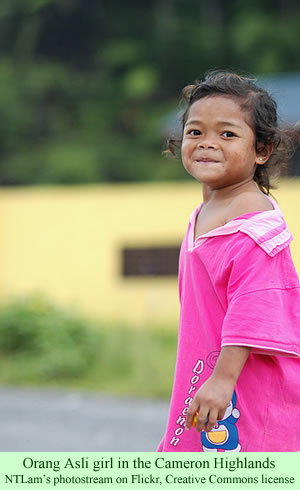 Two months later, on October 8, 2011, the Prime Minister of Malaysia, Seri Najib Tun Razak, announced in his 2012 budget speech to parliament that “to ensure the safety of those affected [by the landslide], the government allocates RM 20 million [US$6,376,000] for relocation to new housing areas.”

Shortly after the landslide, authorities had quickly blamed unusually heavy rains for causing the steep hillside above the village to suddenly sweep down into the town. The tragedy was a natural disaster, most sources said. But a video posted on the Web last week suggests that that may not have been the case.

The video, “Deadly Landslide at Sungai Ruil Cameron Highlands: God Made or Man Made,” makes the argument that a large construction project on the hillside may, in fact, have been the primary cause of the landslide. The four and a half minute video opens with footage of the disaster scene of August 7, 2011. The narrator says that the MP for the Cameron Highlands, who was on the scene, quickly pronounced it to be a natural disaster. It was the first time an accident of that magnitude had hit the village.

Viewers are then treated to scenes of dramatic earthworks across the skyline above the community. Captions tell us that it is the construction of a massive township project. The distance from the project to the landslide is less than 70 metres, the video claims, as the camera moves along in a vehicle next to the earthworks.

Those claims are nothing new. A reporter for the independent news portal Free Malaysia Today on August 9 last year interviewed a local policeman who said, in contrast to statements in other press accounts, that it was not, in fact, raining that fateful Sunday night when the hillside gave way. He pointed toward the construction project and suggested that the blame was on the developer. That reporter interviewed others who said the same things.

A European photographer, Angelique Gross, who is spending six months traveling around Southeast Asia, reported on her photography blog about visiting Sungai Ruil on January 23, 2012. Along with many quite charming photos of the community, including some wonderful shots of cute Semai kids, Gross wrote about her visit.

She describes the village as having 45 houses. With its 1,300 residents, it is the oldest Orang Asli community in the Cameron Highlands. She describes taking a long walk up out of Tanah Rata to the village and feeling quite welcome in the community, particularly since she included a local guide to help her along. The people “were happy to let me take their portrait[s],” she writes, though some of the children were quite shy of her at first.

She indicates that the villagers were determined to not leave their community. It is where they have lived for a long time. Because of the long walk up from Tanah Rata, she writes, few tourists visit the village. But that may change. A new resort is under construction “right next to the village.”

Ms. Gross worries that, although resorts and tourism in the Cameron Highlands undergird the local economy, all that tourism may adversely affect the village. At least as of now, the people give visitors a warm welcome. She does not comment about the landslide last August, or whether it may have been the construction of the resort that prompted the tragedy.