Many citizens of the Democratic Republic of Congo (DRC) believe that having sex with a Mbuti woman can cure a backache, or intercourse with a young Mbuti virgin can heal diseases. These superstitions prompt Congolese men to rape the pygmy women in the Goma area, where many have resettled due to the violence they have endured in their traditional homes to the north, in the Ituri Forest. 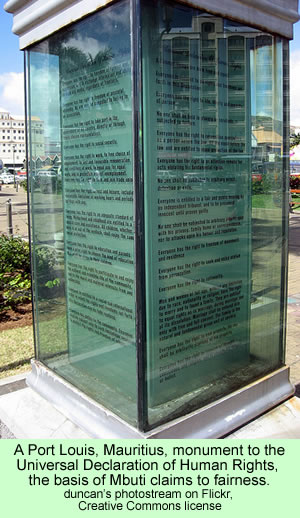 The Mbuti, however, are speaking up for their own rights. Joseph Itongwa Mukumo, coordinator of the Program for the Integration of the Pygmy People in North Kivu (PIDP), points out that the very term “pygmy” is itself derogatory. He was quoted by a reporter last week as saying that about 23,000 pygmies currently live in the province of North Kivu, not including Mbuti who may subsist in more inaccessible areas and conflict regions.

Mr. Mukumo added that “many consider pygmies to be backwards, just having come out of the forest. The integration of pygmies as an equal population group remains a great challenge, as they face discrimination and rejection due to their cultural and social difference[s].”

A Mbuti woman, who didn’t want her name to be used, emphasized the discrimination she often feels. “When I pass by people, they hold their noses claiming I stink. It’s so hurtful.” This woman, who lives in the village of Rusayo, outside Goma, dislikes the prejudice that many Congo people feel toward the Mbuti. Because they are physically distinct from the rest of the citizens of their country—they have very short statures—they are subject to constant discrimination.

Justin Shamutwa Masumbuko, who coordinates an NGO that promotes the protection of pygmy rights in the DRC, similarly denounces the prejudice that he and other Mbuti experience. He claims that not only are their wives and daughters frequently raped, but rebel groups, guards in the nearby Virunga National Park, and ordinary citizens commit various crimes against them. People frequently violate their property rights, he says.

He condemns the government of the DRC for having no policies to help the pygmy people effectively integrate. “There is no pygmy in Parliament, nor [do] any hold an important position in government,” Masumbuko adds.

Mukumo says that because they are human beings, the Mbuti should have the same equal rights as everyone else. He cites the Universal Declaration of Human Rights as the basis of that assertion. He adds that they intend to “continue to denounce all types of discriminations against pygmies and fight for their rights, especially the right to equal treatment as Congolese citizens.”