Ian Brown, a native of Tristan da Cunha but now a resident of the UK, paid a visit last month with his wife to the Italian town of Camogli, the birthplace of Andrea Repetto, his great grandfather. Unlike a lot of news reports from Tristan da Cunha that are only of local interest, this seemingly routine story posted last Thursday has broader implications. Repetto family members, particularly Brown’s great grandfather himself, were important figures in Tristan history, people who helped foster its tradition of peacefulness. 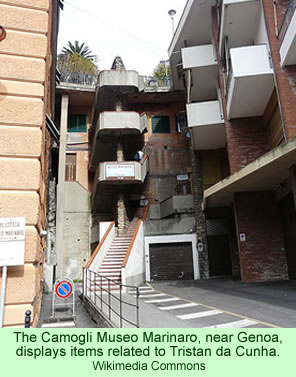 The Camogli Link page of the Tristan DC website reported that Mr. Brown has a strong interest in the history of his great grandfather and the community near Genoa where he came from. Ian has fostered in Camogli, an old fishing community and now a thriving tourist town, a recognition of their link with the remote British dependency in the South Atlantic. Not surprisingly, he has also promoted the recognition of Camogli on Tristan.

The Camogli Museo Marinaro displays materials about Tristan, and of course Tristan has the Camogli page on its website. Mr. Brown has furthered the link by repeatedly visiting the community, providing materials from Tristan for the museum and photos for the Tristan website.

The history of the Repetto family, which Mr. Brown promotes, is unique. His great grandfather, the petty officer on the barque Italia, and another man, Gaetano Lavarello, survived a shipwreck on the coast of Tristan in 1892. They both married local women and adopted Tristan as their home. Their descendants still live on the island.

Andrea married a young Tristanian named Frances Green, the granddaughter of Peter Green, a man who had been the informal, de facto, leader of the community on Tristan soon after the death of the founder of the settlement, Corporal William Glass. With the permission of the owner, Repetto and his family moved into a house that was being abandoned by a woman who was moving to South Africa.

Even though the island has traditionally cherished its absolute equality, informal leaders have naturally emerged, and Andrea became one of them. He denied to other Tristanians that he was the leader of the settlement whenever anyone would say that—the mark of a true leader in such a community.

A test of Andrea’s peacemaking qualities occurred while he and Frances were still fairly young. In 1908, two sons of the woman who had abandoned the house to Andrea and Frances, plus a cousin of theirs, returned to Tristan and claimed their mother’s building as their own. The sudden claims on the home of Andrea and Frances posed a crisis for the community.

They lived in a settlement which, at the time, had no government structure, no police, no judiciary, and no formal way of resolving disputes. The visiting British minister and his wife happened to get involved and helped, but when things reached a crisis, it was really Mr. Brown’s great grandfather who solved the problem—in the typically steady, quiet, Tristanian fashion.

After six days of pressing their claims, and trying to get into fights with people, the interlopers decided to force the issue. They climbed onto the roof of the Repetto home and started to repair the thatching. They were physically asserting their dominance over the house. Someone summoned the minister, who told the men on the roof that they really had no valid claim unless they could produce a paper from their mother stating that she wanted the house to be taken back from the Repetto family. They had no such document. He walked away, but the situation remained tense.

Andrea talked to the instigator of the problem and told him he didn’t want to have any trouble—he just wanted to be friends. As they walked around, he tried to soften him up. He repeated to the man that if he had a document from his mother, they would move out as quickly as possible. He then said that he and his wife would be glad to give up their bedroom so he could move in with them.

The visitor thought about these generous offers and protestations of friendship, and soon gave in. He apologized profusely for the way he had been acting. He promised that he would make no more trouble. Repetto had exhibited the Tristan way of quietly resolving conflicts by extending a strong sense of respect to an antagonist.

Andrea’s wife Frances was also a strong person, an influential leader among the Tristanians, particularly the women. Their son Willie Repetto, acting as leader of the Tristan community during their enforced exile in England from 1961 to 1963, became a key figure in quietly, but effectively, convincing the reluctant British government to allow the people to return to their island.

According to Peter Munch’s intriguing book Crisis in Utopia, the volcano that had forced the evacuation had quieted down. Mr. Repetto had been elected to the position of Chief Islander, a position without much real authority. But he was able to convince his fellow Tristanians to work together to ensure that they would return to their homes. In a community without any tradition of people becoming leaders, Willie Repetto understood how to exert understated, but effective and quite temporary leadership.

So Mr. Brown’s genealogical quest has deeper meanings than just family pride. The Repetto story, and the contributions of the descendants of Camogli, form significant chapters in the history of a community that has figured out ways of meeting challenges without giving up its foundational beliefs—respect, equality, and peacefulness.