Prominent Inuit sculptor Abraham Anghik Ruben believes that one of the core concepts of his society is that humanity must exhibit reverence for life. That spirit, he says, is often referred to as one of the “ancient Inuit commandments [which] is passed on through the Raven creation myth.” 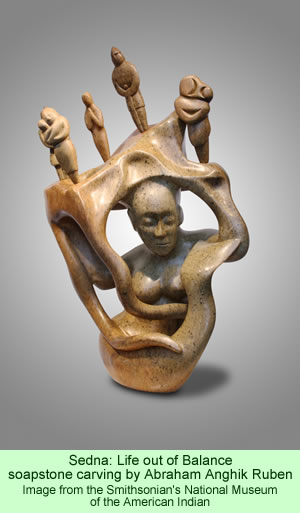 Some of Ruben’s creations have been chosen to be part of the first solo exhibition by an Inuit sculptor at the Smithsonian Institution in Washington, D.C. Saying that his work reflects his fundamental Inuit beliefs, the artist indicates that he has been working for 40 years to attain this level of prominence.

One of his creations on display is called “Sedna: Life out of Balance.” It portrays, for the artist, the fact that the weather has gone haywire because of the extremes of cold and warmth due to global climate change, especially in the Arctic. The Sedna myth figures prominently in Inuit culture, and continues to be retold at times.

Ruben, who works in bronze, stone, bone, and ivory, was raised in Paulatuk, the Northwest Territories, which is an Inuvialuit community, a subdivision of the Inuit people. He particularly focuses on Inuit mythology and folklore, especially on the prehistoric meetings between the Inuit and the Norse peoples in the eastern Arctic of Canada and neighboring Greenland.

A curator at the Smithsonian, Bernadette Driscoll Engelstad, indicated that the museum selected 23 of Ruben’s works for the exhibition because of the boldness of his contemporary visions and the large-scale format of many of his works. “We were drawn to Abraham, [who] has distinguished himself in many way,” she said. A number of his large works—a carved narwhal tusk is over 1.5 metres long—are filled with many fine details.

Ruben says that the works chosen for the exhibit involve “the inevitable consequences of contact as a way to put forward ideas and stories, images in stone.” He adds that “when two peoples meet and have a relationship that lasts for several hundred years, a lot of things happen including warfare, trade, intermarriage, collective hunting, exchange of cultural ideas and exchange of technology.”

Ruben’s father was a hunter and his mother a seamstress. He studied design at the University of Alaska in Fairbanks and has settled on Salt Springs Island off the coast of British Columbia.

The exhibition of his works, titled “Arctic Journeys/Ancient Memories: The Sculpture of Abraham Anghik Ruben,” opened at the Smithsonian’s National Museum of the American Indian in Washington in early October and will continue until January 2, 2013.