The organizers of the Ladakh International Film Festival (LIFF) are promoting a movement in India to build awareness of the need to protect women and girls from rape, infanticide, and feticide. The festival, which began last summer, is now receiving films for its second year. Some 600 people attended last summer. Organizers are hoping the festival will increase tourism. 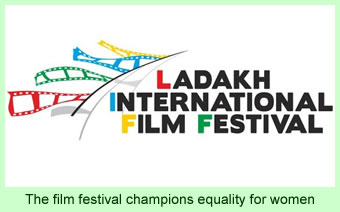 The movement that LIFF has initiated is called Campaign RED, standing for the principle that women in India deserve Respect, Equality, and Dignity. Meghna Agnihotri, a Director of LIFF, said that the new campaign does not necessarily focus on changing other people, or agitating on the streets, or even pestering government agencies. Instead, she said, “Campaign ‘RED’ is all about chang[ing] oneself and influencing others to a better and inspired living.”

The organizers hope to obtain 37 million signatures of people who will support their campaign. Ms. Agnihotri indicated that the gender gap in India is 37 million less females than males.

A member of the group that organizes the festival, and now the Campaign RED, said that the organization wants to develop sensitivity among individuals so they will change their own attitudes and those of others in their neighborhoods. They plan to continue the campaign during the 2013 film festival, which is scheduled for June 15 through 17 this year, and they will encourage attendees to pledge their support. They expect to reach out to partner organizations, asking them to also help change attitudes toward females.

A recent news story in the Times of India said that LIFF itself is incorporating more women into its organization. The 2013 festival will focus on “Women in Cinema” and it will have the tagline “Celebrating Womanhood.” The festival program will include a panel discussion on crimes against females in India, and it will review practical ways to achieve equality for women in that country.

As a news story in this website indicated last November, equality for women has been a critically important value for the Ladakhi people. Rural women in that peaceful society are unique in India for being quite self confident, in large part because they feel safe from attacks by males.

Ladakh contrasts with New Delhi and other urban centers, where crimes such as the December rape and murder of a young woman on a New Delhi bus are common. There is a higher rate of sex crimes in the national capital than in any other major city in India. In fact, New Delhi has more sex crimes than the five other largest Indian cities combined.

Ladakh may not be perfect—no society is—but at least women are safe from violence there. A film festival that is encouraging equality for women is, itself, an encouraging, and certainly most appropriate, development in that society.