The Voice of America news service reported last week that the San groups in Botswana, including the G/wi, have filed a court suit against the government for continuing to deny them access to their lands. Survival International (SI), an indigenous rights organization based in London, is aiding the San peoples in their struggle. 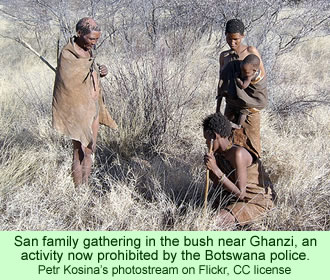 Despite the fact that the San won a major court battle against the Botswana government in 2006 guaranteeing them the rights to their lands in the Central Kalahari Game Reserve (CKGR), the government, according to the San, continues to hassle them. SI alleges that government harassments and efforts to intimidate the San people have been increasing in recent months, prompting this latest court action.

Rachel Stenham, a spokesperson for SI, says that one of the ways the government is attacking the San is by denying them permission to reenter the CKGR when they have temporarily left. The San people are afraid, she said, “to stay inside the reserve for fear they either will be taken out by force, or the next time they try to go back into the reserve, they will not be allowed to go back in to see their families.”

She also said that the Botswana paramilitary police, the Special Support Group, has taken to patrolling the CKGR looking for people that, they allege, are hunting illegally. She indicated that several San people have been arrested while using traditional methods of hunting game.

News reports several months ago indicated that the government has outlawed hunting by the indigenous people. It has started arresting people for gathering wild foods as well as for hunting without the permits that are never, in fact, issued.

Stenham told the Voice of America that the San people must be permitted to live in peace on their traditional lands. But the government’s policies are making life very difficult for them. “They are not being allowed to hunt, and game is basically the main food that the Bushmen totally rely on,” Stenham said.