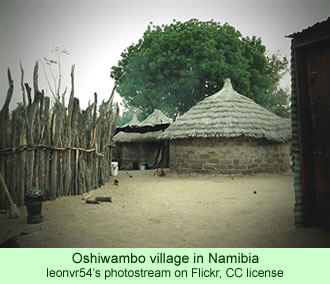 Oddly, the Ju/’hoansi suffered an invasion of farmers from the area of Gam to the south of their lands four years ago. Herero farmers from Gam cut the fences of the Nyae Nyae Conservancy in 2009 and brought their cattle north illegally onto Ju/’hoansi property. The dispute, which dragged on in the news for years, appears to have finally been settled.

The Oshiwambo farmers, moving down from northern Namibia into the N≠a Jaqna Conservancy, have apparently been aggressive with their invasion. They have been bringing their animals across a veterinary fence into the conservancy for the past three months, and have already fenced in between 5,000 and 6,000 acres for their cattle.

According to a news report last week, a member of the !Kung community, Edward //Xari, blamed a former member of the !Kung traditional authority, Aohou Ngavitene, for the problem. He claimed that Mr. Ngavitene had sold conservancy lands to the farmers from the north. //Xari alleged that he had used as his means of authority an official stamp that formerly belonged to the late chief, John Arnold, who died not long ago. The local police commander has now taken possession of the stamp.

“Every weekend they [the Oshiwambo farmers] come to buy, return to the north for a few weeks, and then return to settle with their families and cattle,” said //Xari. “They cut down trees to make poles as they wish, with no permits. We are San people who stay in the conservancy.”

He complained to the news reporter that the !Kung used to be able to live off the revenues from harvesting devil’s claw herbs for market, plus wild fruits and wildlife meat. However, with so much land occupied at present by the outside farmers, they are fenced out of their traditional lands and sources of income.

“Now we have no access, no freedom of movement. They are disrespecting us, maybe because we are San,” he said.

Several Namibian national and regional officials denied having any knowledge of the matter. The office of the deputy prime minister says he knows nothing about it. Likewise, the regional council office in Tsumkwe and the members of the San Extension Programme, in the Prime Minister’s Office, deny knowing anything.

However, Likoro Masheshe, Chief Control Officer of the Tsumkwe Settlement, admitted that he thought the allegations were true, though he said he was not up to date on developments.

Joseph Anghuwo, Commissioner of the Otjozondjupa Region of Namibia in which the two conservancies are located, said that if the story is true, then the invaders are violating Namibian law and they will be prosecuted. He referred to the invasion of the Nyae Nyae Conservancy four years ago and said that if a similar thing is happening again, the government will take appropriate measures.

This invasion is not the first for the !Kung. A 2004 history of civil rights in the Tsumkwe West area by Richard Pakleppa (1) provides some background to the issue. The Pakleppa article, available in Google Books, indicates that as early as the year 2000, the government was considering plans to relocate refugees from other parts of Namibia to Tsumkwe West. John Arnold apparently led a successful protest against the plan. Things are not going as well since he died.