A museum in northwestern Montana is now displaying a special exhibit about the Hutterites, designed to dispel the false images about them aired a year ago by the National Geographic Channel. 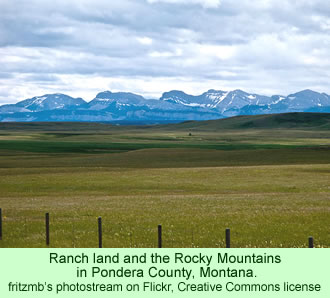 The exhibit, prepared by Kristy Calvery, Curator of the Conrad Transportation and Historical Museum in Conrad, Montana, showcases the realities of nearby Hutterite colonies. Conrad, the seat of Pondera County, is located 140 miles northwest of Lewistown, Montana, and is at the edge of the Rocky Mountains. The King Colony, portrayed by the National Geographic Channel (NGC), is located near Lewistown.

National Geographic filming at the King Colony was planned in 2011, and the ten part series that resulted was aired weekly beginning in late May last year. The producers heralded the opening of the television series with a fair amount of self congratulations. NGC executives claimed that there would be no feeding of lines to participants—the series would be a true portrayal of life at a typical Hutterite colony.

A few weeks after the series started, however, Hutterite leaders at the King colony and elsewhere expressed their dismay at what they felt were betrayals by NGC. They claimed that the programs gave “a distorted and exploitative version of Hutterite life that paints all 50,000 Hutterites in North America in a negative and inaccurate way.” They went on to state that scenes and dialogs were contrived, resulting in make believe situations.

Ms. Calvery decided to counteract those inaccuracies by mounting a museum exhibit focusing on the five Hutterite colonies of her own county. She visited those five colonies, which are all part of the Lehrerleut branch of the Hutterite faith. To judge by the museum website, she drew most of her artifacts for the display from a visit to the Midway Colony. According to Janzen and Stanton’s book The Hutterites in North America, that colony is near Conrad.

The display provides basic facts about the Hutterites, and emphasizes the contributions that the colonies make to the broader Montana society. The five Lehrerleut colonies in the county are Birch Creek, Kingsbury, Midway, New Miami, and Pondera.