When a new cultural center opens in Gjøa Haven, Nunavut, this fall, it will include some items taken from the community over 100 years ago by Roald Amundsen, the famed Norwegian explorer. The Inuit town is named after the small ship sailed by Amundsen and his crew, the Gjøa. 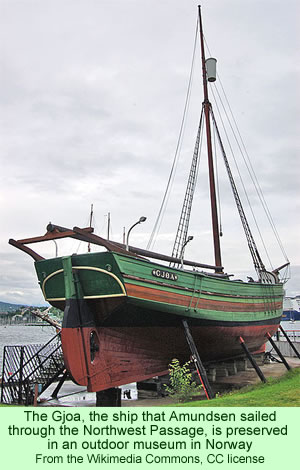 According to a news story last week, and an article in the Wikipedia, Amundsen sailed into the Inuit community in October 1903 and stayed nearly two years, until August 1905. When he finally left, he took with him about 1000 items—tools, weapons, clothing—all materials the Inuit had traded with him. He was evidently fascinated by the artifacts of ordinary daily life, the stuff used by people who were well adapted to living in a polar region.

The following year, 1906, Amundsen and his crew finally became the first exploring expedition to make it successfully through the Northwest Passage to Nome, Alaska, and five years later, in December 1911, he made history when he became the first person to reach the South Pole.

When Amundsen returned to Norway from Arctic Canada, he handed over his ethnographic collection to the University of Oslo, where most of the items remain on display at the institution’s Museum of Cultural History. Since some artifacts have been sent to other museums, the staff at the museum decided to repatriate 15 items to the new cultural center in the community where they had come from.

With the community’s new Netsilik Cultural Centre anticipated for completion this fall, the Oslo museum expressed willingness to send some artifacts. Construction of the facility was first announced in 2011. Mayor Soanni Sallerina of Gjøa Haven expressed his excitement about the news of the repatriated items. “It will be very satisfying to see the artifacts that were taken from our ancestors displayed in our museum so our youngsters and elders who are left are able to see them,” he said.

People involved with the Museum of Cultural History in Oslo also appear to be excited about the transfer of items. Tom Svensson, a retired social anthropologist at the university, said, “this will attract more visitors who can now read a full story about the Netsilik, both historically and contemporarily.” He has been helping with the repatriation process.

The Head of the Exhibits Department at the museum, Tone Wang, has traveled to Gjøa Haven to help oversee the transfer of artifacts. She provided details about the Amundsen collection. She said that while the famed explorer was doing scientific work in Gjøa Haven, such as measuring the direction of the magnetic north pole, he also worked on learning Arctic survival skills from the people in the community.

She added that he acquired local artifacts with an unusual degree of enthusiasm. Members of his crew complained, according to their diaries, about their small ship being crammed with Inuit stuff. “They said ‘he’s going completely crazy: he’s stuffing this tiny little boat with ethnographic materials,’” Ms. Wang indicated.

She explained that the items lack any flashy characteristics—they are the stuff used in daily life by the men, women, and children of the community. “He was extremely interested in functionality,” Ms. Lang said, as she pointed to ladles, fish hooks, driftwood bowls, and such.

A firm date for the opening of the new cultural center has not been announced yet, but Mayor Sallerina expects that the materials should be available for public viewing by the end of September or early October.

Gjøa Haven is also the nearest community to a Back River camp of the Utku Inuit band, movingly portrayed by Jean Briggs in her book Never in Anger.