“Today, we can all feel the energy and buzz of Nubian youth. As a community, we Nubians have accomplished some of our goals, but the best is yet to come,” Haggag Oddoul said in an interview published on Friday. The comments by the famed Nubian Egyptian writer were included as part of a 5,000 word feature in Al-Ahram Weekly, a major Egyptian publication. 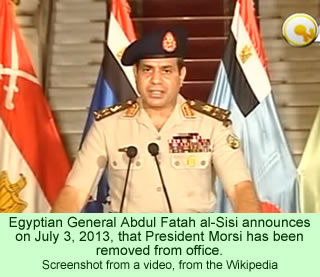 The journalist, Gamal Nkrumah, provides rich details as he covers the background of Nubian discontents, the divisions among the 3,000,000 Nubians, and, most critically, how they have been faring during the recent events that have riven Egyptian society.

The worldwide news coverage of the military coup in Egypt on July 3, and, last week, the bloody suppression of Muslim Brotherhood protests by the Egyptian armed forces, should prompt anyone to be concerned about the fate of relatively peaceful societies, such as the Nubians, caught up in the midst of such turmoil. Mr. Nkrumah, the eldest son of the late president of Ghana, Kwame Nkrumah, is an editor at Al-Ahram Weekly, and has clearly done a lot of research for this article.

He features his interview with Oddoul several times in his lengthy piece. The novelist has often expressed his support for the Nubian right of return—to the lands along the Nile from which they were expelled in the mid-1960s due to the construction of the Aswan Dam. “I have been engaged in the Nubian people’s right to repossess their ancestral homeland for the past 22 years. It is a struggle that has cost me dearly,” Oddoul told the journalist.

Oddoul spoke about himself during the interview. He explained that he was born of Nubian parents in Alexandria, and raised in that city. He and his wife, also a Nubian, lived in Alexandria where he worked as a junior civil servant until he retired at age 55. His fame as a writer only occurred late in his life, in 2005 when he won an award.

He told Nkrumah that he is not optimistic about the chances that the newly launched Nubian Nile Party will achieve much for the Nubian people. He said that the new party was founded by Hamdi Suleiman, a Nubian living in Europe.

Nkrumah may not entirely agree with Oddoul’s assessment. He writes that many young Nubians are quite enthusiastic about the new party, which shows, he feels, that they are still optimistic about improving Egyptian, and Nubian, society. The party was founded early this year, driven, Nkrumah writes, by a desire to escape from racial discrimination, oppression, and the appropriations of their lands. However, he argues that a large majority of Nubians believe their interests are better served by forming political pressure groups or by lobbying efforts than by joining political parties.

Relatively few Nubians joined the Freedom and Justice Party, formed by the Muslim Brotherhood of the ousted President Mohamed Morsi. They were alienated by the preparation of the new Egyptian constitution last year. The lone Nubian involved with the document drafting process, Manal Al-Tibi, resigned in disgust because of the biases insisted upon by the Muslim Brotherhood majority. The constitution appeared to denigrate the African aspects of the Egyptian population—namely the Nubians—in favor of a supposed Arab and Muslim national cultural unity.

The new Nubian Nile Party has yet to be officially registered, probably because 1,000 signatures are needed on a petition for this to happen. The party was not able to get any representatives into the now-closed parliament. In Nkrumah’s view, the importance of the new party is that it brings into the open the discriminations suffered by the Nubian people, their desires for a return to the banks of the Nile, and their other sensitivities.

Adel Moussa, a spokesperson for the Nubian Nile Party, explained to the journalist what he sees as its advantages. “We Nubians have deep roots in Egypt,” Mr. Moussa said. “We reject those who question our Egyptian identity and commitment to Egypt.” He argued that the new party should help prevent other parties from exploiting Nubian issues for their own purposes.

The Al-Ahram Weekly piece fortunately goes well beyond current politics. It explains that Nubia—southern Egypt—is of huge strategic importance to the nation, even if the opinions of the people living along the Upper Nile have not been valued very much. The Aswan Dam itself is a strategic asset to the country, and Nubia provides a physical and cultural link with the rest of Africa to the south. Furthermore, Nubia is rich in minerals, such as gold, manganese, phosphates, petroleum, and high-quality granite.

The article quotes Saleh Zaki Murad, the head of the General Nubian Club in Cairo, who insists, as numerous others do, that the primary issue for Nubians is the right of return to their ancestral lands along the Nile, not religious versus secular concerns. The Nubian people are divided on many issues, not just on politics, but they agree that they need the right to return.

On that issue, they feel they have a common cause with the Palestinians. But unlike them, the Nubians feel that they also suffer discrimination due to their dark African skin color, a racial issue that is not as important among the Palestinians.

Nkrumah emphasizes his perception of the Nubian people: “They have taken their cue from the Nubian youngsters and have by and large shifted to a more forceful attitude,” he writes. He doesn’t explore whether traditional Nubian peacefulness will be compromised by the more assertive approaches of the young people.