The Nyae Nyae Conservancy in northeastern Namibia, run by the Ju/’hoan San, is a highly successful development project, one of the best in southern Africa, according to the authors of a new book. The conservancy is not without serious problems, however. The invasion of the Herero farmers from Gam in 2009 is still not resolved, and the invaders continue to live in Tsumkwe, the town at the heart of Nyae Nyae. 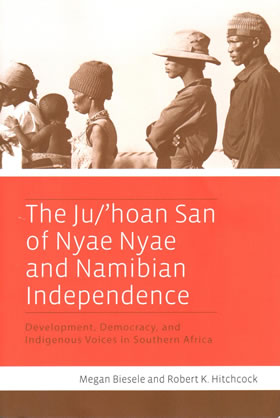 The invaders use resources that the Ju/’hoansi can ill afford. The government of Namibia meanwhile makes statements about the Ju/’hoansi need for justice, though it does not actually resolve the problem. But despite that difficulty, the conservancy continues its effective development projects.

Megan Biesele and Robert Hitchcock, the authors of the current book about the Ju/’hoansi, are anthropologists who have done extensive research on the San societies and have long-standing commitments to the people whom they have studied. Their book is a history of the activism of the Ju/’hoansi in the years leading up to the independence of Namibia in 1990, and the 23 year period since then.

Their work is a testimonial to the creative abilities of those San people in resolving their problems. It is intended as an update to the classic ethnographies of Richard B. Lee, Lorna Marshall, Elizabeth Marshall Thomas, Polly Wiessner, and many other ethnographers who have done fieldwork in this society. The study of peaceful societies is much richer because of the work of these two scholars.

A bit of background will help. Tsumkwe, the town at the heart of the traditional Ju/’hoansi lands called Nyae Nyae, was established by the South African government in 1959, and a borehole providing water was opened a couple years later. The government developed it as a modern community, with a store, agricultural fields, a police station, and housing—enticements that worked to draw the nomadic, foraging people away from their wandering lifestyle and into the benefits of a modern, civilized town.

Many Ju/’hoansi settled in, hoping for an easier life, but they soon encountered an increasing population density and the concomitant environmental, social, and health problems which their social system was not adapted to handling. Water resources in the area rapidly diminished and the diet of the people deteriorated due to substituting maize meal for more varied wild foods. Fights became routine, while abuse and rapes became common. As the rates of homicides soared, the Ju/’hoansi themselves began calling Tsumkwe “the place of death” (p.10).

By the early 1980s, many Ju/’hoansi, disillusioned with some of the facets of town life, began searching for ways to get out of Tsumkwe’s squalor and violence. They wanted to live at permanent water sources remote from the town and take their chances at raising crops, herding livestock, and foraging—a mixed economy, as the authors term their new lifestyle. They wanted to reestablish half-forgotten social patterns.

Some started a “back to the land” movement, a flight from the town into the bush where they, or their parents, had previously lived. The heart of this book focuses on the ways the Ju/’hoansi themselves, with help from outsiders, took charge of their own lives and instituted the changes they wanted to make.

At that time, they realized that numerous other people—mining companies, forestry firms, military officials, and non-Ju/’hoansi pastoralists—coveted the lands they had abandoned a couple decades earlier when they had moved into Tsumkwe. In March 1981, a liquor store opened in town, funded by government loans, and the people saw the dangers it posed.

The increased availability of alcoholic beverages, many realized, would exacerbate social tensions and increase violence. Returning to the n!oresi, their former resource areas, would be a way of helping them reinstitute their traditional, effective, approaches toward diffusing conflicts. It would also reassert their rights to lands threatened by outsiders. By 1982, the first pioneers, three communities, had moved back to the land, followed by seven more in 1987. By 1992, the Ju/’hoansi had reoccupied 30 n!oresi (the singular is n!ore) outside Tsumkwe.

After Namibia gained its independence in 1990, new national leaders expressed a commitment to working with local people to learn about their needs. The government helped set up an important conference in Nyae Nyae in July 1992, the third in a series of wildlife management and planning meetings. By the end of the three-day conference, the outsiders—bureaucrats, officials, scientists—realized that the rest of the country needed to be engaged in managing its lands and wildlife as effectively as the Ju/’hoansi had been doing.

The story that Biesele and Hitchcock tell is not all roses. They describe the missteps made by the Nyae Nyae Conservancy, its predecessor agencies, various funding groups, Ju/’hoan leaders, and outside officials and scholars. The wealth of details provides depth and honesty to a story in which both authors, especially Biesele, have played important parts.

One of the best features of the book is the way the authors explain how the Ju/’hoan society has changed, and yet held onto their traditional values in modified ways. For instance, they point out that ancient social rules preventing direct confrontations and avoiding overt criticisms still apply. People still inform others of their thoughts through indirection, to avoid the unpleasantness of direct confrontations and the possible exacerbations of existing conflicts. These approaches “are long-term tenets of Ju/’hoan social life that have persisted,” they write (p. 185).

The only reasonable criticism of this important work is that it needs a glossary, since readers interested in peaceful societies will use it repeatedly. “Now what, again, was the Ju/wa Farmers Union,” one might wonder next year when turning to this essential reference source. Hopefully, the authors will continue to keep the work up to date, and will include a glossary in their next edition.

The book was published in hard-back in 2010 for U.S.$120.00. In 2013, the publisher, Berghahn, decided to make the updated edition available in paperback for only $34.95, a price that is within the reach of ordinary budgets. The authors need to be congratulated on their important work—and the publisher for making it available to a broad audience.