There is little doubt that Conrad Glass, the sole policeman on Tristan da Cunha, has a good sense of humor, at least to judge by the photo accompanying a press release last week. The release describes a somewhat whimsical public relations stunt by a firm that sells long underwear over the Web. 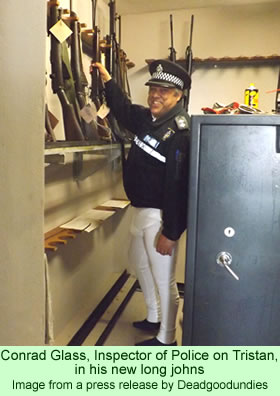 The PR effort involved the company giving 45 pairs of long johns to some working men on Tristan da Cunha to help them get through the recent austral winter. The press release mentions that the Tristanians agreed to have their pictures taken in their long underwear, and it includes two images of the men, one of which is of Mr. Glass posing in a shop building in the Settlement. He looks, from the picture, as if he were enjoying the humor of the whole situation.

The company behind the promotional stunt, Deadgoodundies.com, “is an online only retailer stocking the best in designer men’s underwear,” according to the release. The 45 pairs of men’s long johns they sent were shipped out of Bristol many months ago, and after a seven week sea voyage, they finally got to Tristan in time to help keep 45 male Islanders warm for the winter—the summer time in the northern hemisphere.

Dawn Repetto, Head of Tourism on the island, reported back to the company last week that the islanders were delighted with the long distance charitable donation. “Thanks to Deadgoodundies, the men of Tristan have been very warm this winter. The fishermen have been wearing them to sea, up the mountain herding sheep and out at the potato patches, and when it’s really cold, to bed as well!”

Officer Glass was one of those “kept cozy on duty in his long undies,” the release indicates. He was formerly the Chief Islander, and he wrote a book about the duties of the policeman on the island, Rockhopper Copper. That title was taken from the colony of rockhopper penguins on the island, which he has to check on periodically as one of his duties. The press release does not tell us if he wore the long johns during his most recent visit to the colony, much less how the birds reacted to his new attire.

Ms. Repetto provided additional notes in her report back to the online merchant. “The long johns have done their job so well a few of the island ladies have been yearning after a pair. I spoke with one elderly gent and he said, ‘Ya they’s rale warm, the easterly wind can’t get through ‘em.’ It is often said on the island that easterly is a lazy wind because it doesn’t go around you, it goes through you.”

It is worth glancing at the self-promotional materials from businesses when they can tell you with a straight face about the slothful habits of the east wind.