The government of Namibia established the Nyae Nyae Community Forest for the Ju/’hoansi earlier this year and the land is already threatened by illegal grazing. According to a report last week in the daily newspaper The Namibian, Xoallan /Ai!Ae, the chair of the Nyae Nyae Conservancy, went to the national capital, Windhoek, to plead with the authorities for help. 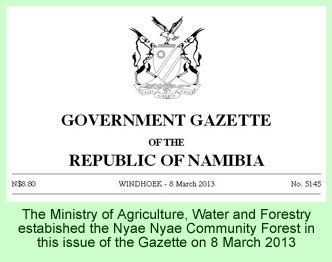 “Unfortunately, we have to report that illegal grazing is taking place in the Nyae Nyae Community Forest on a widespread and continuous basis. This is a clear criminal offence, since none of the livestock owners have been given permission to graze from the Forest Management Committee,” /Ai!Ae said.

He indicated that the illegal grazing, which began in 2009, defeats the basic purposes of the creation of the community forest in the first place. “Without some level of enforcement of the laws relating to the Forestry Act, our community forest cannot manage its resources if others are allowed to utilise them without permission or regulation,” he said.

The Namibian approached a spokesperson for the Ministry of Agriculture, Water and Forestry. She replied that the matter needed to be reviewed by the other two agencies that also could be involved with enforcing the laws. She said that queries should be taken to the Ministry of Environment and Tourism.

The excellent recent book on the Ju/’hoansi by Biesele and Hitchcock refers briefly to the hoped-for creation of a Nyae Nyae Community Forest. The authors, writing several years ago, indicate that for a long time the Ju/’hoansi have wanted to carefully manage, utilize, and conserve their forest resources.