Oscar Temaru, the leader of the opposition in French Polynesia, has called on educators in the territory to begin teaching children in English rather than in French. In early May, Temaru, the leader of the pro-independence party, was defeated in territorial elections for president by his long-time opponent, Gaston Flosse, who wants the Tahitians to remain an integral part of France. 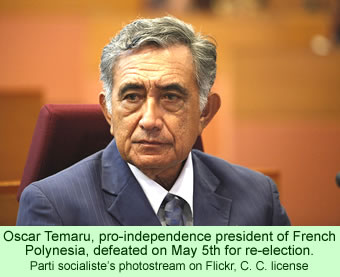 This summer, the Tahitians heatedly discussed the appropriate language to use in the Society Islands. In June, when a French court struck down some laws passed by the Territorial Assembly because they had been discussed partly in the Tahitian language, Édouard Fritch, the assembly president, appealed to the President of France. The Territorial Assembly passed a resolution on the issue in July.

It is not clear from the news report last week if the discussions about the Tahitian language last summer played a role in Mr. Temaru’s latest proposal. He argued that switching from French to English would make geographic and economic sense for the territory.

“We are surrounded by English-speaking countries and our first industry is tourism and 90 per cent of the visitors are English-speaking people. There are a lot of people around the world who are interested in coming to Tahiti, but when they look at the other countries around us they speak English and we speak French. So that’s an obstacle, it’s a barrier—if they want to hear the French language, they go to Paris, not Tahiti,” he said.

Temaru admitted that the government in Paris would likely oppose such a move. The news report added that the French government provides $US 700 million to support the education system in the territory.

But, he argued, French Polynesia should look to Singapore, where English is used in professional communications. English is “the language of diplomacy, politics and economics throughout the world—we have to update ourselves,” he said. He acknowledged that the change will take time, but he said it is the proper way for the territory to proceed.

A report in the Christian Science Monitor six years ago about the switch by Rwanda from French to English also credited the inspiration for changing national languages to Singapore. Rwandan leaders wanted “to help Rwanda become the Singapore of Africa. English is their language of instruction,” the Monitor journalist wrote. Obviously, Rwanda does not have the peaceful history of Tahiti, but it does have hopes of making considerable economic progress—like Singapore.