A new footbridge over a river in the Philippines may assist recovery efforts for the endangered tamaraw as well as help the local Buid and Tau-Buid communities. A report in a Philippine news service described the older bridge, which the new one replaced, as “a rickety cable footbridge.” The new, 103 meter (338 feet) bridge, inaugurated recently with some fanfare, promises to ease local transportation needs. 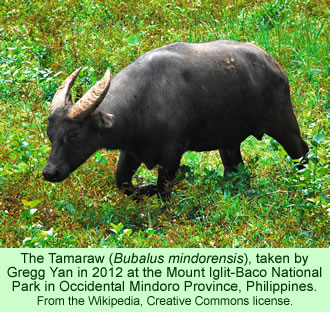 The bridge is evidently located near the Tamaraw Gene Pool Farm, a facility that had attempted, without much success, to breed in captivity the very rare tamaraw, a small bovine relative of the water buffalo that lives in only a few locations on Mindoro Island.

The Mounts Iglit-Baco National Park, also known as the Mangyan Heritage Park, is a large, 75,445 hectare (186,428 acre) tract to the north of the Gene Pool Farm. The park was established primarily to protect habitat for the rare animal. According to an article in the Wikipedia, the tamaraw is “one of the most seriously endangered animals in the world.”

Officials from the park, the gene pool farm, the provincial government, conservation groups, and representatives of the Buid and Tau-Buid communities in the area attended the opening of the new bridge. Grace Diamante, director of the Mindoro Biodiversity Conservation Foundation, said, “the bridge will not only serve the people of Barangay Manoot, particularly our brothers and sisters of the Tau-Buid and Buhid groups, but will also allow more people to know more about the Tamaraw and the biodiversity of Mindoro.”

Rod Agas from the gene pool farm added his praise for the new bridge, indicating that it would be important in planning for the future protection of biodiversity on the island. He pointed out the fact that the gene pool farm can care for animals rescued from poachers and rehabilitate them before releasing them back into the wild.

Rodel Boyles, the Protected Area Superintendent of the national park, who is also the concurrent project manager of the Tamaraw Conservation Program, respects the prerogatives of the two indigenous peoples who live in the area and have the legal right to hunt the Tamaraw. The Buid and the Tau-Buid “have their own beliefs on how to utilize the resources within the park,” according to the TCP website, so Boyles “engages them in constant dialogue on floral and faunal conservation efforts” to protect the biodiversity of the region.

A news release a couple months ago from the World Wide Fund for Nature (WWF) provided details on the efforts to conserve the tamaraw, the numbers of which have dropped to less than a thousand, and perhaps as low as a few hundred animals.

It quoted a leader of the Tau-Buid people, Fausto Novelozo, who said, in an English translation provided by the WWF, “without the tamaraw, there will be no Tau-Buid. Lives and livelihoods are inextricably tied with biodiversity.”