The fascinating experiences of an Orthodox Jewish woman researcher, who lived with a Pennsylvania Amish family recently, were related in a newspaper article last Thursday. 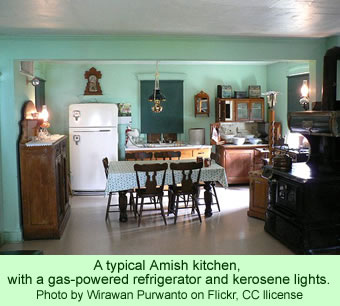 Ayelett Shani interviewed the researcher, Dr. Rivka Neriya-Ben Shahar, to find out how she was able to arrange to live with the Amish family, what she observed, and how she compared the conservative Pennsylvania Anabaptist people with the Haredi, the Ultra-Orthodox Jews. The interview, published in Haaretz, a major Israeli newspaper, is revealing.

As a feminist, though also an observing Israeli woman who wears a head covering, she was studying what she perceives to be a conflict between the desires of ultra-Orthodox Jewish women to have careers in a culture that frowns on that sort of thing. Her adviser suggested that she read up on the Amish. But she was told to not expect to be able to interview them. They won’t agree to interviews. Besides, she was working as a postdoc in Boston.

But while she and her husband were visiting relatives in Pennsylvania, they took a drive through Amish country. They happened to see a beautiful Amish girl along the road so they stopped and the researcher asked her if they might talk for a moment. The girl asked what she wanted. She explained that she also wore a head covering, that she believed in God the same as she did, but she came from Jerusalem. Could she see their farm?

The girl agreed. Rivka asked if she might be permitted to also see inside the house, and the girl’s mother, Mary, was willing. (The interview carefully does not reveal even the first name of the girl.) Mary invited her in and they talked for a bit. Later, via correspondence, Mary agreed to let Rivka come and stay in their home with them.

Rivka concealed the fact that she was a researcher—she strongly suspected that her home-stay would not be accepted if they had known. She immediately tried to fit into the family life. She pitched in with work in the kitchen, washed the dishes, helped out with the laundry, and, even more critically, offered to use her car to take Mary places that she needed to go. To judge by the interview, it sounds as if the two women got along well.

The charm of the interview is in the personal details and the penetrating insights that Rivka offers. Ayelett, the interviewer, asks about why the Amish can take some forms of public transportation and not others—why are some things permitted in their society and others are not? They can ride in cars but not on airplanes.

Rivka explains that whatever is easy is forbidden, an explanation that simplifies Amish rule-making. She concludes that because of their restrictions, they tend to spend a lot of time at home rather than traveling about. Ayelett insists it’s a form of suppression, and Rivka disagrees.

Some of the best parts of the story are the comparisons of the Amish lifestyle with that of the Haredi. They might seem superficially similar, but Rivka explains the differences. The day to day lives of women in the two societies are quite similar. Chores are not peripheral to women—they are the main driving force of life. Of course, the Haredi woman might have a washing machine that uses electricity, but up to that point, they are remarkably comparable.

The bigger difference, in Rivka’s opinion, is that the Haredi woman reads. Apparently Mary didn’t read much, because Rivka found her to be woefully ignorant about many aspects of contemporary life. Rivka finds some aspects of Amish life to be better than Haredi life in Israel. The Amish do not live in totally separate communities, for instance, and they are involved, to some extent, with other Americans.

Mary’s beautiful daughter works as a maid in a regular American home—exposed to all the enticements of secular U.S. life. Educationally, the Haredim are more open, but culturally, the Amish are more connected. The interview probes these differences.

One facet of Amish society that seemed to bother Rivka is the way they view life in a hierarchical fashion. They see God at the top, and then, in order of subordination, Jesus, men, women, children, then animals. Rivka asked Mary if she really believed that women were inferior to men. She did. Absolutely—it was in the Bible. Rivka makes it clear—her candor is refreshing—that she had a hard time not being judgmental. But she kept telling herself that she was a guest in their home.

An interesting incident occurred when she drove Mary somewhere and they couldn’t find a parking space in the community they were visiting. Mary simply suggested that they pull onto the lawn of a stranger. Rivka explained that they couldn’t do that. The owner would probably call a towing service and have her car towed away. “Why call a tow truck for someone who’s parked in your yard? After all, if he’s parked there it means he couldn’t find another parking spot,” Mary said naively.

Some of the facts about the Amish discussed in the interview will be familiar to anyone who reads about Amish society. The sanctions they place on members who deviate from their rules, for instance, or the importance of modest dress. The best parts are the more personal observations the scholar makes about Mary and the Amish more generally.

Ayelett asks Rivka if she thinks Amish women lead good lives. She admits that she discussed that with them, and that “I envy their inner state.” She personally finds modern life to be quite complex, but she found Mary to be serene. She works extremely hard, but she believes that her life is a good one. “She is certain she is doing the right thing. I wish I knew that I am doing the right thing,” Rivka concludes.