Over a week ago, conflicts between rival Arab and Nubian clans in Aswan, in southern Egypt, escalated into street violence that claimed 26 dead and over 50 injured. Accounts in the Egyptian and international media differ as to who or what caused the violence. 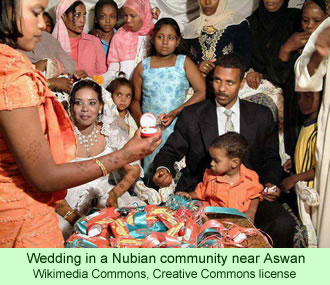 The story, as told by the Egyptian government on Saturday the 5th, was that the conflict between the Bani Helal Arab clan and a Nubian family known as the Daboudiya began the previous Wednesday, the 2nd, at a school in Aswan. Supposedly, a female student was harassed, prompting offensive graffiti to be painted on the walls of the school, which led to violence that spread into the streets. Officials also said that the Arabs were involved in a drug smuggling ring that angered the Nubians in the community. Different accounts reveal the tensions in the city, especially among the minority Nubians.

One Nubian, who asked to not be named, said that he locked his family and himself into his house after two of his relatives were killed. He said that the people were terrified, particularly since they had called for help but the police had blown them off, telling the callers, “you work it out.”

Adel Abu Bakr, another Nubian, said that the problem began when members of the Bani Helal clan beat a Nubian, then shot and killed three other Nubians. Another Nubian was then killed. After their funerals, the Nubians invaded the Arab neighborhood, killing over a dozen people with sticks and daggers. He added that if the police had been present, everything would have been different. A military government spokesman blamed the Muslim Brotherhood for fostering the violence, though most of the news media discounted that statement since the military rulers of Egypt now appear to blame almost all of their nation’s troubles on the government of ousted President Mohamed Morsi.

Over the weekend, the violence spread, as the Bani Helal Arabs retaliated against the Daboudiya Nubians, with mobs torching homes and people dying in pitched gun battles. Local residents repeatedly denied government accounts that the Muslim Brotherhood was involved. One Nubian man, Abdallah Ghareeb Madany, said that the Arabs had put some anti-Nubian graffiti on a wall after some Nubian students had walked through their neighborhood on the way to school. “They wrote some provocative phrases on the walls, saying that they are the masters of the place,” he said.

On Monday last week, the media reported the welcome news that a three-day truce had been negotiated between the Arab and the Nubian clans. Both groups formed committees to see that the terms of the truce would be enforced within their communities. The fighting that had claimed the lives of 25 and injured 56 others seemed to be abating, at least temporarily. On Tuesday, another report indicated that a 26th person had died from burns received during the fighting. Wednesday, the two sides agreed to extend the truce for at least another month.

On Thursday the 10th, the Egyptian news source Al-Ahram Weekly carried an in-depth analysis of what had happened. Local residents in Aswan maintain that the fighting began due to a confrontation with a drug dealer from Bani Helal. Amr Al-Seman, an Aswan resident, told Al-Ahram that the dealer “was selling drugs in Al-Shabiya, a Nubian district, on Wednesday when nearby school students—mainly from the Daboudiya tribe—ejected him from the area following a scuffle.”

Al-Seman added that the drug dealer came back the next day. On Friday, the 4th, the dealer came again, that time along with other members of his clan. They started shooting, killing four Daboudiya, including one woman, and injuring 10 others. When members of the Daboudiya clan went to the police, the officers did nothing. The Nubians then took matters into their own hands.

Fatma Emam, a Nubian researcher, also said the spread of violence was due to the absence of security forces. She blamed the chief of the security for Aswan for not doing anything to effectively stem the spreading violence over the weekend. “We have repeatedly complained of the way the state deals with Nubian issues in exclusively national security terms. Successive governors have been indifferent to any development of the area and development projects are repeatedly brushed beneath the carpet,” she wrote on Twitter.

Hossam Sweilam, a security expert quoted in the Al-Ahram account, agreed. “What began as a minor dispute escalated because of inaction on the part of the governor and the Interior Ministry,” Sweilam said. “The governor should have intervened immediately to broker reconciliation ….” The leader of a Nubian pressure group called Qatallah, Osama Farouk, also blamed the police, the army, and the government for failing to intervene in the spreading violence.

Al-Ahram quoted a post on Facebook by Haggag Oddoul, the prominent Egyptian writer and member of the recent constitution-writing committee. In the magazine’s translation of Mr. Oddoul’s words, he blamed the trouble on the 1964 uprooting of the Nubians from their homes in Old Nubia. They were moved to resettlement areas which are surrounded by hostile, armed, Arab neighbors.

“Nubians have had more than their share of insults and abuse. Armed groups used to attack and steal the houses of Nubians. None of the perpetrators were punished. Now Nubians know they must carry guns and threaten to use them in order to defend themselves,” Oddoul wrote.