James Suzman published an essay last week that raises a troubling question: why would a supposedly peaceful society such as the Ju/’hoansi treat animals cruelly? Suzman’s op-ed piece in the New York Times describes in some detail his observations about the San people, and particularly their uncaring and frequently hostile treatment of their dogs. 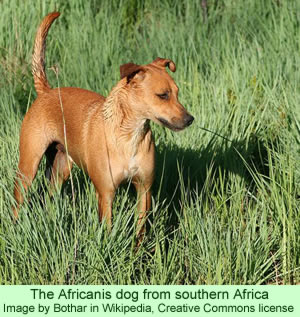 The story by the British anthropologist is intriguing. In 1995, during his fieldwork in a Ju/’hoan village in Namibia, he adopted a pet—or rather, a dog adopted him. He gave him the prosaic name “Dog.” This particular animal seemed braver than the other village canines, which tended to slink around, keeping out of sight and shying away from physical interactions with humans who would often kick them or throw stones at them.

The village dogs seemed happiest when they joined parties of humans heading out into the bush hunting or foraging—at least then, their tails would wag. Otherwise, they had to deal with their persistent hunger by scavenging scraps or hunting insects, mice, or lizards. One man said that his dog had learned to kill and eat snakes.

Dog, and the other canines in the village, were Africanis, a breed that is apparently common in that area. It is well adapted to scavenging, living with humanity, and hunting independently. His pet was slender and stood only about 18 inches at the shoulders—a relatively small dog.

Dog bonded with Suzman because the anthropologist showed some affection toward him. When the Ju/’hoan were not watching, he would give Dog leftovers from his plate and, as they became closer, he provided him with his own food bowl. Suzman evinced real affection for his pet, scratching his chest and ears as he sat curled at his feet, and Dog tried to stay with him all the time.

But the idyll didn’t last. When Suzman returned to the village from a trip, he found Dog cowering inside a thorn bush, wagging his tail, glad to see him, but too scared to come out and greet him. The author quickly realized that Dog was suffering—several patches of hair, skin, and flesh were rotting off his back and his bones were showing through. Suzman learned that some children had found an acid bottle he had left outside by mistake, and they had poured it onto some inanimate objects, then on a couple of the village dogs, to experiment with its corrosive powers. He and a friend managed to euthanize Dog and bury him.

Suzman then had a discussion with the Ju/’hoansi about what to do next. He urged that the children who had tortured the dog should be punished, but they rejected the idea. “Dog was a dog,” they told him, and the children were just demonstrating their curiosity. They had found the author’s propensity for caring for the animal strange, and the burial simply weird.

But, they reflected, they had seen the same sort of preferential treatment for dogs by other whites in southern Africa. When white ranchers drove their trucks, their dogs would sit on the passenger seats up front and the Ju/’hoansi laborers would ride in the back bed. The Ju/’hoansi were rarely allowed into the homes of the white farmers, where dogs lived indoors in luxury.

From the Ju/’hoan perspective, dogs should not be considered as humans—they are just dogs. Each species of animal, including humans, has its own customs, manners, and ways of interacting with the natural universe. Furthermore, empathy with an animal was a question of looking at reality from the perspective of that creature, not of projecting human perspectives onto it.

Their success as hunters depended on them understanding and correctly interpreting the ways of the animals they hunted—understanding their perspectives. Correctly predicting the movements and behaviors—the perspectives—of the animals made all the difference in the search for dinner. But the Ju/hoan understanding of animal ways did not extend to caring for them or feeling sorry for them. Suzman adds that other hunter-gatherers treat dogs similarly, which challenges a look into the literature on other peaceful societies.

Colin Turnbull, in his famous book The Forest People (1961), pointed out that the Mbuti were cruel toward animals. They would mock an animal that they had just killed, and would singe the feathers off a bird while it was still alive. Even though they relied on their hunting dogs, they still kicked them around.

Singer (1978) suggests that, in their tightly-knit, cooperative, sharing society, the Mbuti need an outlet for their aggressive tendencies, a “culturally constituted defense mechanism,” and the vicious beatings of their canines forms part of that outlet. Singer adds that since the Mbuti dislike any open shows of aggression or lack of harmony—which might split a band—their aggressive tendencies are displaced onto their dogs.

Briggs (1982) analyzes the frequently harsh Inuit treatment of animals differently than Singer did for Mbuti society. She reasons that contradictory, opposite values are important and constructive, at least for Inuit society—they are factors that help promote their nonviolence. As a hunting people, killing is essential, but nonviolence is an equally essential value in maintaining a society.

Contradictory values are generated in the Inuit by conflicting psychological needs which they learn to create and manage through their socializing techniques. The Inuit clearly enjoy killing—their eyes shine with excitement when they tell hunting stories—yet they react with horror, not only to the idea of killing a human but to any form of interpersonal aggression such as shouting.

The Inuit, Briggs argues, clearly associate danger with aggression, from the animal deaths that they witness around them to their own repressed hostilities toward others, and to their realization that others might reciprocate the same feelings. They could cuddle and adopt a baby animal, and moments later kill it brutally—contradictory values that, at least to them, help foster their attitudes toward human nonviolence.

Not all of the peaceful societies treat animals so harshly. The Semai (Robarchek 1977) and the Chewong (Howell 1984) believe in treating animals with respect, since the fury of a tropical storm could be the result of someone even laughing at one. The Amish take a particular interest in animals, which they see as important members of God’s creation (Hostetler 1993).

In sum, it would be convenient to assume that societies that believe in peacefulness should also treat animals nonviolently. But the literature suggests differently: values fostering peacefulness toward other humans may only be peripherally connected, if at all, with nonviolence toward animals.