The Semai have won an important land rights victory in a Malaysian state court. A news story last Thursday reported that the High Court in Ipoh, the capital city of Perak State, agreed on Wednesday, September 30, with the Semai claim that their native tribal rights to their tanah adat (customary lands) did exist under Malaysian common law, and that the state government was wrong to have given the land to a private corporation. 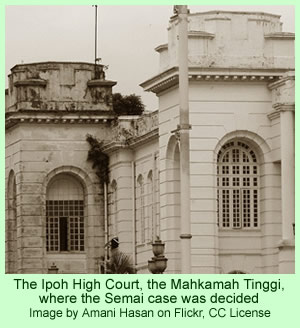 The issue made the news in June this year in a story about the Semai attempts to gain recognition of their rights to their traditional lands. The people of Kampung Senta had been sued by an outside corporation, who claimed that the Semai were trespassing on their lands, for which they had deeds to show their ownership. The Semai in that community counter-sued.

The report last week provides details about the case as well as the news that the High Court had found in their favor. The court followed precedents set in other Malaysian states—Selangor and Sarawak—that had also recognized the land rights claims of the Orang Asli (original peoples). Justice Dato’ Che Mohd Ruzina bin Ghazah accepted the testimony of the Semai as well as the supporting evidence provided by Colin Nicholas from the Centre for Orang Asli Concerns.

The Semai in the community discovered in 2010 that representatives of the Bionest Corporation had been encroaching on their land so they challenged the company. Bionest sued the Semai and a court ordered that the people of Senta should be evicted from their land. In response, two Semai individuals, Kong Chee Wai and Bah Kana, representing themselves and the other 142 people in the village, countersued.

They asked the High Court to declare that the lands in question were customary lands. The plaintiffs also asked that the lands that Bionest had taken away be returned to the village. The court agreed, particularly since it found that the defendants had not provided any credible challenges to the Semai testimony.

Except for about 50 acres where the Semai had allowed Chinese farmers to grow papaya and guava, which are excluded from the judgment, the court declared that the government must now gazette the rest of the 2,209 hectares (5,460 acres) as a reserve for the Orang Asli people.