A Piaroa village put on a play this past Saturday evening, October 3, about their legend of the way the gods created humanity and the cassava gardens that they cultivate. The actors in the production were members of the village of Paria Grande, located in the municipality of Atures in Amazonas State, to the south of Puerto Ayacucho, the state capital. 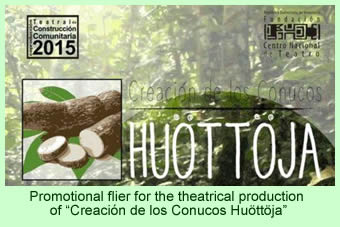 The play, “Creación de los Conucos Huöttöja” (in English, “Creating Piaroa Homegardens”), expresses the indigenous knowledge of the Piaroa people through scenes that display the essence of their culture and society. (Huöttöja is another name for the Piaroa.) It was co-produced by the Centro Nacional de Teatro (CNT, the National Theatre Center) and the Teatrales de Construcción Comunitaria (Theatrical Community Building Program). The production was the result of extensive research and work since early in 2015.

According to a news report last week, the production was a way of communicating, by means of a theatrical performance, the importance of their traditional culture and artistic history. It was seen as a way of strengthening the traditional knowledge of the community, while at the same time reaching out to the broader population of Venezuela.

The play, which was collectively developed by the village, was guided by America Ramirez, a facilitator for CNT, and by Daniel Otero, an elder in the Piaroa village. The performance at 7:00 pm Saturday evening in the sports field at Paria Grande was free of charge.

The news article indicates that the play focused on the gods Buoka, Chejerü and Wajari, who collaborated on creating human beings and fertility. The special emphasis was on the role of the homegardens in promoting strength and autonomy to the people, as well as the use of cassava as a major food in their diet.

Heckler (2004) makes it clear that the homegardens of the Piaroa provide the central living spaces for the communities—the most important spots for their socializing, the places where families gather, where men discuss issues, where women visit, where visitors congregate. The homegardens have many different levels of meanings for their owners.

Overing (2006) says essentially the same thing. She describes the homegardens, and the cultivation of cassavas, as essential parts of the placid, peaceful Piaroa community lives. She writes, for instance (p.20), how the Piaroa village is “exceedingly comfortable, easygoing, and immensely safe” as children play freely, men socialize, and women chat while they peel their cassava roots.