Global climate change is harming the Inuit way of life, especially in the village of Umiujaq, in northern Canada. Catherine Hours, an AFP reporter, visited the village and wrote last week in a story carried by Yahoo News that conditions in the village are changing due to warming temperatures—more so than in many other places. 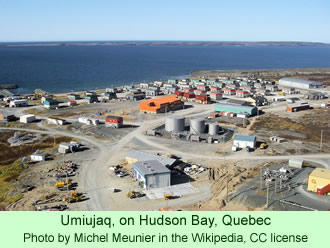 The reporter indicates that the effects of the warming seas, which shorten the ice-fishing season, are just the latest in a long pattern of cultural changes that the people of Umiujaq have had to endure. Nellie Tookalook told her that winter used to start in October or November, but it arrives later now. “I love ice fishing, I love fish eggs,” she said, but it gets quite scary fishing on the increasingly thin ice. A hunter out on his snowmobile recently fell through the ice and was lost.

Ms. Tookalook, who teaches Inuktitut, one of the Inuit languages, at the school in Umiujaq, also complained about the fact there are fewer caribou, and that the winter snow melts faster. The reporter writes that Umiujaq, a village without road access on the eastern shore of Hudson Bay, is part of a region that is warming at twice the speed of the rest of the earth.

One of the consequences of the warming is the instability of the permafrost, which is caused by the warming temperatures. In the early 2000s, as a result, the foundations of buildings constructed several decades earlier when the village was first settled started to buckle and crack. A fire station in a nearby settlement collapsed. Walls on buildings commonly develop large cracks.

The natural vegetation is changing as well. Stunted spruces are moving north, replacing lichens and mosses. The fauna is changing too—Canadian elk, groundhogs, and even toads are appearing. Heat waves are becoming common, and people try to not go out when it is too hot, at least in their terms.

The warmer conditions have harmed the fishing. Lucassie Cookie told the reporter that there are far more flies and mosquitoes during the summer than there used to be, and because of the heat, the fish go into deeper waters. It is now harder for hunters to find seals, one of their traditional food sources, out on the ice flows.

Charlie Tooktoo, a municipal councilor for Umiujaq, expresses his distress that global climate change is destroying their way of life and much of the world doesn’t even seem to care. “I am a little bit mad that the world is not doing much [to stop the warming],” he says.