While the Semai usually retreat from conflicts and violence, one man who has developed a successful business has also gained renown for his willingness to fight. The New Straits Times featured the story of John Bah Tuin last week, his popular inn, and his fight with a gang of robbers.

Mr. Tuin developed and runs the Rainforest Inn, located in Kampung Menson, in the Ringlet Township on Malaysia’s Cameron Highlands. Tuin managed a grocery business before opening his inn. His statements to the newspaper sounded like a successful businessman from any other country: “I learned how to overcome obstacles, difficulties, trials and tribulations to get where I am today,” he said.

“I could live comfortably with the grocery store business, but am determined that entrepreneurship is important in changing the way we live and work so that we don’t depend on the government for our welfare,” he said. The Semai man came from the highlands area, though the paper does not identify his home village. He hopes his example will inspire other Semai to move away from their more traditional ways of living. 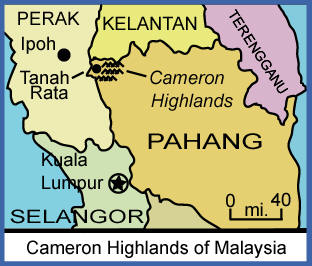 He used his savings to develop a tourist inn on a plot of ancestral land near the village of Ringlet, which is about five miles south of Tanah Rata in Malaysia. Tanah Rata is the major tourist center for the Cameron Highlands, in the northwest corner of Pahang state in Peninsular Malaysia. His development is located in a tract of pristine forest next to an unpolluted river—an ideal spot for an inn, he felt.

He ignored critics and funded the construction of traditional Semai bamboo and thatch houses that comprise the inn. He hired his fellow villagers to clear the land for the development, which is in the peaceful countryside away from the hustle of the commercial world. He used Facebook to help develop a following for the inn.

The New Straits Times does indicate that he has had troubles with his business. During a couple rainy seasons, the river has flooded out his establishment and he has had to rebuild each time. He has also been cheated by travel agencies who did not pay him the agreed-upon amounts. He says he sometimes gets tired of the struggles, but he feels it is important to send a message to his fellow Semai:  “Never tire of doing what [is] good for oneself, family and the community,” he stated.

The NST report briefly mentions that at one point he held at bay 10 robbers with a parang, a large machete-like knife used for clearing vegetation in Malaysia.  A blog entry provides more details about the incident, which apparently was widely noted in the social media. It seems as if Mr. Tuin was driving on a local highway one Saturday night when he stopped at the side of the road to use his phone.

Suddenly, three vehicles pulled in and 10 men got out—highway robbers. Tuin laid into them with his parang, beating up bandits and chopping off a hand of one of them in the process. He suffered some minor injuries himself in the fight. But rather than seeking medical care, he just went back to his business. He is viewed as a legend in some circles.

Robert Knox Dentan pointed out in his landmark book on the Semai (1968) that they have had a long tradition of fleeing from confrontations or fighting. He does say, however, that when taken out of their traditional nonviolent villages during the Malayan Emergency of the 1950s and trained to be soldiers, the Semai men were quite able to fight and kill communist enemies. One man, describing his experiences, told Dentan casually, “we killed, killed, killed (p.58).”

Dentan surmised that it was as if the Semai at the time were able to compartmentalize their highly nonviolent village life and their lives as soldiers in the rainforest. “Back in Semai society,” he wrote, “they seem as gentle and afraid of violence as anyone else. To them their one burst of violence appears to be as remote as something that happened to someone else, in another country (p.59).”

It appears as if aggressiveness, as well as business acumen, have become part of the identity of Mr. Tuin, who is determined to remake Semai society in his image.