Location. Tahiti is the largest island in the Society Islands archipelago of French Polynesia. The residents of all the islands are generally known as “Tahitians.” They have blended in with outsiders so much that their exact numbers are hard to calculate. This entry focuses on traditional Tahitian society, which persisted in rural parts of the islands at least up to the 1960s. Robert I. Levy described that society in his 1973 book Tahitians: Mind and Experience in the Society Islands. He compared village life in a community in rural southwest Huahine island with an urban neighborhood in Papeete, the capital. He described many aspects of Tahitian peacefulness, such as the roles that the various Christian churches play in the rural culture of the islands.

Economy. The traditional Tahitian economy was based on horticultural activities, keeping livestock, and fishing, but today the primary economic activities on the major islands, especially Tahiti, Moorea, Bora Bora, and Huahine, are based on tourism.

Beliefs that Foster Peacefulness. There is very little conflict, open hostility, or aggression in traditional Tahitian society. The people act gently and rarely display anger toward one another or toward visitors. Tahitians do not believe they have any control over nature or the behavior of other people; in fact, they believe that trying to change the nature of reality inevitably causes a rebound that destroys the initiator. People are optimistic but passive, a condition produced by their socialization practices and reinforced by other values in their society. Their universe is less frustrating cognitively than one where individuals believe they are able to change things.

Avoiding and Resolving Conflict. On occasions when conflicts arise, the parties move to defuse them. Tahitians believe that hostile feelings should be brought quickly out into the open verbally; if not, resulting explosions of open anger could provoke the spirits of the ancestors to retaliate and perhaps even kill the angry individual. They believe that anything extending beyond the brief verbal expression of anger is wrong and dangerous, particularly to the person who has those feelings. They have many words expressing nuances of hostility and aggression. 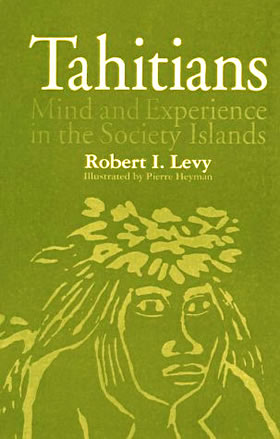 Gender Relations. Marriage relationships are relatively free of anxiety, though men have been known to hit women, and, just as bad in their culture, women have responded by cursing men. The Tahitian word for love, here, has an emphasis on action and active belief in the relationship. It implies that, for heterosexual couples, they want to be together, both with their bodies and their minds. The man who only has physical desire for a woman, even if he lives with her, does not properly have a feeling of here unless the totality of his thinking is focused on her. The word also is used for parent-child, sibling, and friendship relations—it relates not so much to intentions as it does to actions and actual behavior.

Raising Children. Tahitians fuss over and cherish babies, but around the age of two, children cease to be the center of attention. They may respond by having temper tantrums, but they soon learn that they are powerless to rebel, subvert, or evade, as might have been possible when they were only dealing with their parents. As they grow through this stage, children adopt the belief that social frustrations are caused by the whole community rather than by a few people. By training children that they cannot alter or resist social realities, adults also teach them to avoid the aggression that would result from rebelling against society. While adults will tolerate brief explosions of aggression by children, they discourage prolonged displays of hostile behavior. As a result of all this, children learn to play without aggressiveness or conflicts.

Sense of Self. Tahitians are generally not inclined to inflate their own individual importance. Rather, people tend to deflate themselves, to be low and humble.

Social Control. Tahitians express hostile feelings through teasing, withdrawal, and gossip, and they release their hostilities through carefully controlled dramatic events. When an audience of bystanders is present, they can give vent to dissatisfaction, shame, fury, anger and other emotions through various kinds of violent actions that do not harm anyone. For instance, a man who is furious at his wife could dramatically set fire to a pile of coconut thatching—though located at a safe distance from houses. Even when they drink, they do not normally act more hostile than at any other time, at least when they are in public. The only time when fights and violence occur, on an occasional basis, is during private drinking in the home.

Strategies for Avoiding Warfare and Violence. Tahitians feel that passions such as anger are unnatural and generally disruptive. They cope with anger through a number of avoidance strategies: they avoid provocative situations; they try not to get angry; they talk out problems; they express issues verbally; they may express anger in a physical but symbolic fashion; and finally, if all else fails, they may express their anger by touching but not hurting the other person.

But How Much Violence Do They Really Experience? Robert Levy, an anthropologist, witnessed very few physical fights during his fieldwork in rural Huahine, 1962-1964, and the ones that he did see were not very violent. He heard about three pushing and shoving incidents, all involving the same group of drinking companions. A policeman he interviewed indicated that there had been no serious crimes among the 3,000 people living in the area to which he was assigned, and only occasional disturbances connected with drinking. A teacher had not seen a fight during his two years at the village school, though on a couple occasions he had witnessed younger children crying or throwing pebbles in anger. There were two serious crimes, both homicides, on Huahine in the first half of the 20th century, in 1928 and in 1953. More recently, incidents of violence have in fact occurred. In November 2014, two different women reported they had been physically abused in two Tahitian communities on the same day. One of the attacks occurred on Huahine.

December 24, 2015. Tahitians Learning from the Maori