The Lahu, a Tibetan/Burman people of southwest China, idealize gentleness; in their worldview, men and women have many similar characteristics. As a result, according to Shanshan Du, they think that both men and women should be treated in an identical fashion. Their ideal value for themselves is “Nud” (soft), which implies that both sexes should be gentle, nurturing, caring, considerate, respectful, and humble. 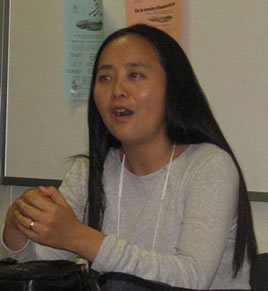 Shanshan Du (pictured), an anthropologist at Tulane University, described her research among the Lahu people at one of the more interesting panel sessions last Friday of the International Peace Research Association (IPRA) biennial conference in Calgary.

She pointed out that childcare for the Lahu is the most important duty in life. As a result, housework is not divided by gender. She said that the society is changing, however, due to pressures from the communist Chinese government and from increasing market forces in their culture. She expressed unwillingness to predict the future for the society. Her color slides highlighted her portrait of this relatively peaceful people, which she analyzes in more detail in her book Chopsticks Only Work in Pairs (2003).

Her presentation was part of the Global Political Economy Commission session titled “The Gift Economy as a Way to Peace.” It opened with a paper by Genevieve Vaughan, who argued that the Western, market based, capitalist economic system fosters a repressive, patriarchal social order, which encourages conflict, violence, and war.

Vaughan views human social relationships on the basis of gifting, and she practiced her beliefs by giving out copies of numerous papers and even a book she has published. She maintains that the market requires equivalency and measurement, whereas gift-giving fosters value for individuals and creates more healthy psychological structures in society.

She says that parents raise their children most successfully when they treat them as the recipients of gifts. Parenting is a process of gift-giving. Mothers (and sometimes fathers) create a culture of gift-giving and nurturing in a home through their efforts to raise their children. But an excessive emphasis on the importance of the market has the opposite effect. It creates a non-nurturing identity, especially for men. As a result, capitalist, patriarchal values are fostered in many societies. Vaughan argues that gift giving is a form of hidden economy in countries such as America, one that is often repressed.

The other two speakers at the session, Barbara Mann and Rauna Kuokkanen, also presented effective papers related to gifting. Mann discussed the ways the beliefs of her society, the Iroquois, promote a peaceable relationship with the earth, the mother of us all. She said the women own the land, the houses, the crops, and all means of production in her society, and gifting is the primary mode of distribution. All economic interactions are seen as gifts by the Iroquois, and consensus is one of their most important cultural patterns. Kuokkanen, a Sami from Finland, discussed gift-giving issues more broadly in relation to women in developing societies.

The IPRA meeting included other memorable presentations, humorous moments, great entertainment, and, unfortunately, some problems with organization. Snafus such as an inadequate number of digital projectors—and ineffective communication in advance about the problem—could have seriously marred the spirit of the conference. Some speakers came from a great distance only to find that they could not use the PowerPoint presentations they had carefully prepared.

But most of the delegates seemed quite willing to rise above the difficulties. Several sessions had to be cancelled at the last moment for various good (and perhaps not so good) reasons, but speakers and their presentations were moved around to other sessions and people reacted with equanimity and generosity. One speaker from the Calgary area had her husband come in with a digital projector from his office and he set it up for her—and for a subsequent speaker. People coped peacefully, and gained inspiration from one another.

(The second of three reports on the biennial IPRA conference in Calgary.)