A small number of books about peaceful societies are especially appropriate for reading clubs or for people just getting into this subject. Well-written, thoughtful, and fun to read, these books may be available in large libraries, borrowed through interlibrary loan (ask at a nearby library), purchased through local booksellers, or found on the Web through such sources as amazon.com or bookfinder.com. Some were best sellers, particularly Thomas and Turnbull. All provide insights and inspiration about the nature of peaceful societies.

Thomas, Elizabeth Marshall. 1959. The Harmless People. New York: Knopf. Thomas writes beautifully about the Ju/’hoansi, then known as the !Kung, a hunting and gathering society in the deserts of southern Africa. She accompanied her parents, Laurence and Lorna Marshall, and her brother John, in a series of family expeditions in the 1950s to study a society that, until then, was little known to the outside world. This international best seller describes the everyday details of camp life, including instances of quarreling and of harmless, cooperative, harmonious camp life. 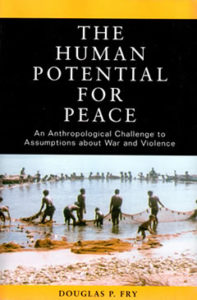 Fry, Douglas P. 2006. The Human Potential for Peace: an Anthropological Challenge to Assumptions about War and Violence. NewYork and Oxford: Oxford University Press. In this effective overview of the field of peaceful anthropology, Fry argues that writers who advocate for the innate aggressiveness of humanity ignore evidence that shows how harmony and peacefulness prevail in many societies. His narrative, which is quite accessible to the general reader, carefully examines the literature in order to build his convincing, well-reasoned arguments: humans are just as capable of ensuring the peace as they are of making war. All societies have the potential for peacefulness.

Turnbull, Colin M. 1961. The Forest People. New York: Simon and Schuster. A popularly-written work about life in an Mbuti band in the forest of the Congo. In the tradition of the best travel writing, the author, an anthropologist, keeps himself in the background as he describes the way the people hunt, dance, marry, play, fight, and celebrate their rituals. The Mbuti are consistently fascinating—as is the book that describes them so well.

Dentan, Robert Knox. 1968. The Semai: A Nonviolent People of Malaya. New York: Holt, Rinehart and Winston. Written for undergraduate anthropology students, this slender, gracefully written volume explores the practices and beliefs of a society that cherishes its peacefulness. The work includes a lot of vital information about the Semai such as their responses to their natural environment, their agricultural practices, their thoughts about health, disease, death, and more. An inspiring, pioneering work of ethnographic scholarship focusing on the peacefulness of a society, this book makes compelling reading. 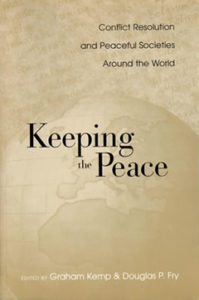 Kemp, Graham & Douglas P. Fry, eds. 2004. Keeping the Peace: Conflict Resolution and Peaceful Societies around the World. New York: Routledge. Chapters on the Paliyans, the Nubians, the Semai, and the Zapotec of La Paz, plus numerous others, highlight this edited collection of essays by anthropologists about the styles of conflict resolution in various peaceful societies. Very effective introductory and concluding material by the two editors, as well as suggested study questions after each chapter, distinguish this work and make it appropriate for use in undergraduate peace studies courses.

Briggs, Jean L. 1971. Never in Anger: Portrait of an Eskimo Family. Cambridge: Harvard University Press. An engaging ethnography of an Inuit community in northern Canada, filled with interesting details about the lives of the people. Briggs describes, with warmth and sensitivity, their social life, their style of child rearing, and their attempts to include her in their community. The author brings herself into the story in order to develop a sophisticated ethnography wrapped inside a page-turning travel account about people who cannot tolerate displays of anger.

Munch, Peter A. 1971. Crisis in Utopia: The Ordeal of Tristan da Cunha. New York: Crowell. Crisis in Utopia is a popularly-written history of Tristan da Cunha. It focuses on the emergency evacuation of the islanders in 1961 due to a volcano eruption, and their struggle to return to their remote, lonely island in the South Atlantic despite opposition from the British government. Munch, a sociologist, followed up on the story with a 1964 visit to the island so he could describe the ways these atomistic, anarchistic, highly peaceful people have coped with these stresses. 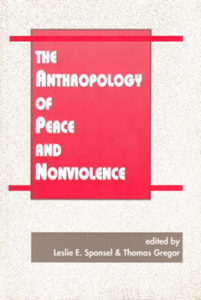 Sponsel, Leslie E. & Thomas Gregor, eds, 1994. The Anthropology of Peace and Nonviolence. Boulder, CO: Lynne Rienner. A work comparable to Howell and Willis, and Kemp and Fry, this volume contains a rich mixture of essays on the Semai, the Zapotec of La Paz, and others. Jean Briggs’ essay, “‘Why Don’t You Kill Your Baby Brother?’ The Dynamics of Peace in Canadian Inuit Camps,” is particularly haunting and provocative. These essays should help convince skeptics that the study of anthropology, particularly of peaceful societies, can provide a vital contribution to peace studies, and vice versa.

Fernea, Robert A. 1973. Nubians in Egypt: Peaceful People. Austin: University of Texas Press. A large-format volume with many stunning photos by Georg Gerster, this work emphasizes the practical reasons the Nubians were peaceful. Fernea does not claim that they were always nonviolent, but he shows how important the effective sharing of economic resources can be in fostering a stable, peaceful social system. Conflict resolution techniques that head off violence and the strong sense these people have of their own peacefulness also highlight this important and readable work.

Kraybill, Donald B. 1989. The Riddle of Amish Culture. Baltimore: Johns Hopkins University Press. Kraybill uses common perceptions and misperceptions about the Amish people to serve as a springboard for his careful, scholarly, well-written explanation of who the Amish are and why they do what they do. Enriched with wonderful photos, this book stands out from others on this society for its lucid explanations and effective style. The reader completes the work with a feeling of admiration for the Amish—and for the ability of the author to explain their society so well. 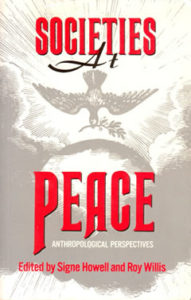 Howell, Signe and Roy Willis, eds. 1989. Societies at Peace: Anthropological Perspectives. New York: Routledge. An edited collection of scholarly essays by anthropologists about the peaceful societies they have studied. Clayton Robarchek on the Semai, Signe Howell on the Chewong, Thomas Gibson on the Buid, Joanna Overing on the Piaroa, Carl O’Nell on the Zapotec of La Paz , and Roy Willis on the Fipa are some of the effective pieces in this work. A worthwhile read for anyone interested in the variations among societies at peace.

Norberg-Hodge, Helena , 1991. Ancient Futures: Learning from Ladakh. San Francisco: Sierra Club Books. Ancient Futures reflects the author’s many years of living in Ladakh, northern India , and it radiates the warmth she feels toward the Ladakhi people. She sympathetically describes the peaceful beliefs of their Tibetan Buddhism, and she lets their joie de vivre lighten the arid landscape. But Norberg-Hodge also allows the dark sides of the picture to emerge, particularly the deleterious effects of rapid development on a traditional society. An eloquently-written, effective book that should captivate most readers.