A number of nonwarring societies can be identified in the ethnographic literature, and some of them, according to Douglas Fry, have even formed peace systems—alliances that help them avoid warfare with one another. 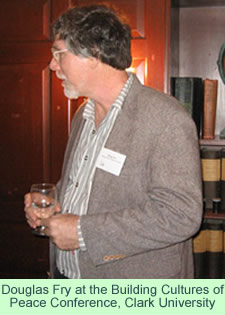 A professor at the Abo Akademi University in Finland, Fry analyzed the external nonviolence of peaceful societies during a presentation which opened a conference in Worcester, Massachusetts, on October 14 and 15. The conference, “Building Cultures of Peace,” was hosted by the Department of Psychology and the Peace Studies Institute of Clark University, and it was held on campus.

Fry opened his talk by referring to a listing of nonwarring societies that appears in his recent book The Human Potential for Peace: an Anthropological Challenge to Assumptions about War and Violence. His list includes over 70 societies that rarely if ever go to war. In his presentation, he cited several ethnographic statements about different societies to the effect that either the culture lacks war, or that people do not engage in warfare, or that members of a society respond to threats from other groups by moving elsewhere rather than fighting.

He referred to the Semai of Peninsular Malaysia as a good example of such a society. Nonviolence characterizes their daily life; they do not go to war and they do not feud. Even when, in the past, they were confronted with slave raiding, they would flee headlong into the forest rather than fight the invaders.

Fry cited other examples from the ethnographic literature of traditional societies that do not fight wars. About the Hanunóo, a society on Mindoro Island that neighbors the Buid, one source wrote, “warfare, either actual or traditional, is absent.” Another writer said about the Sanpoil, an American Indian society of western Washington state, that “all informants denied that any major conflict had occurred ‘as long as could be remembered.’ Admirable relations existed between the Sanpoil and all of their immediate neighbors.”

Fry pointed out the contradictions in Quincy Wright’s famed 1942 book A Study of War. Wright did not admit the possibility that there might be some societies that did not fight wars, a serious omission. Fry finds that the nonwarring hunter-gatherer societies often lack issues to go to war over and they frequently do not have a leadership structure that profits from warfare. Also, intermarriage frequently is a factor in helping keep the peace between hunter-gatherer bands. He summarized recurring factors in the literature that appear to help prevent wars between societies: interdependence, cross-cutting social ties, and values that are opposed to violence.

He discussed the existence of what he calls “peace systems,” groups of societies that may or may not be internally peaceful, but that avoid fighting wars with one another. The Australian Aborigines probably had a peace system—the entire continent of Australia, with its many different societies, may have been nonwarring. Other examples of peace systems that he finds in the ethnographic literature include the aboriginal Inuit societies of Greenland, the tribes of the Nilgiri Hills of southern India—the Toda, the Kotas, the Badagas, the Kurumbas, and the Irulas—and the societies of Peninsular Malaysia, including the Semai, Chewong, Batek, and others.

Fry gave more details about the peace system existing in the Upper Xingu River basin of Brazil—societies such as the Trumai, Kalapalo, Mehinaku, and Wauja. These societies cultivate an active trading relationship that builds on their sometimes artificial differences. If one society manufactures certain types of goods—say ceramic pottery—the others will refrain from making pots, even though they might be quite capable of doing so. The resulting system of trade apparently helps foster peaceful inter-societal relationships. These societies also promote networks of interpersonal connections to help enhance the peace. However, even though aggression is minimal among the Xingu societies, they may go to war outside their system if attacked by other groups.

He expanded his analysis of peace systems by suggesting that the creation of the European Union represents a developing peace system. The founders of the European Community right after World War II were conscious of the need for greater integration, which they felt would foster harmonious relations and help guarantee that the wars that had devastated Western Europe for so many centuries would never be repeated among their countries.

Fry argued that the prevailing opinion in Western Europe is that, whatever disagreements might develop, warfare within their community of nation states was no longer a legitimate tool of statecraft. “A new consciousness exists in Europe. Going to war against one another is no longer a part of their thinking,” he said.

He believes that when the patterns of thinking in societies become focused on nonviolent values, people appear to become accustomed to those values. When warfare is no longer legitimate, people will come to believe that war is simply not a possible way of solving problems. The European Union is a good example of this kind of model. With all of its imperfections, the EU is leading the Europeans to accept the idea that wars within Western Europe cannot happen again.

After his presentation, several members of the invited audience of scholars expressed a lot of concern about including the European Union as an example of a peace system. After all, they failed to intervene in the violence in Bosnia a decade ago, and they were not terribly effective in helping resolve the violence in Kosovo either. Besides, western European countries like Great Britain have been actively supporting American aggression in Iraq. How peaceful is that?

Fry’s response was that the European Union, while not a perfect example of peacefulness, clearly is in the process of developing a peace system. The EU is a group of societies that are striving, quite successfully, to eliminate warfare from among their countries. Yes, they may have failed in Bosnia and Kosovo, but those countries are not within the EU. Yes, all of the individual countries within the EU have their many failings. But the EU itself, he maintains, is an effective model for the formation of a peace system. It is, in this sense, an effective work in progress.