The cause of peace is advanced when the rights and interests of minority peoples such as the Kadar are acknowledged and respected by larger states and nations. These small societies are often at the losing ends of disputes—the dams are built, the forests are clearcut, rights to lands are denied, communities are destroyed.

Two of the Kadar villages to survive in a riverine forest environment in the Western Ghats mountain range of southwestern India have been threatened by a power dam along the Chalakudy River. The threat has clouded the existence of these communities for a number of years. The project has been on hold since February, after the national government in New Delhi stopped it.

Over the past month, the tide of news about the Kadar has been more positive—at least for those who champion the lives of the people and the endangered wildlife. An August 21st news report described the continuing war of words, which has been covered a lot in these news pages in the past few years, between environmentalists opposed to the dam and the business and government interests in Kerala that support it.

According to that report, A. K. Balan, the Power Minister for the state, fired off a letter charging that environmentalists who oppose the dam and the scientists doing the research were the same people, a conflict of interest, he alleged. He named the individuals he was accusing. Ms. A. Lata, from the Chalakudy River Protection Council, replied that the minister had made many erroneous statements. Significantly, he had failed, she said, to understand the overriding importance of protecting the entire Western Ghats region. That was a much bigger, more significant, issue than the narrow questions relating to the power needs of today’s population and industry in Kerala. 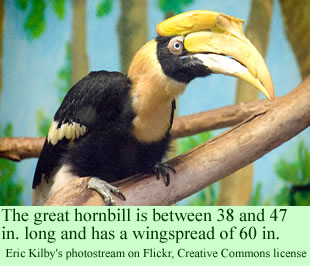 The news was even better on August 30th. A report from the Critical Ecosystem Partnership Fund (CEPF) that day described the work the agency is doing with the Kadar, and the ways that grant funds are changing their relationship to the forest. According to the story, the Kadar used to hunt both of the large hornbill species that still live in the mountainous forests of Kerala, the great hornbills and the Malabar pied hornbills. The Kadar used to hunt them for food until it was declared illegal and they mostly stopped.

The CEPF is a worldwide funding agency that focuses on protecting major biodiversity hotspots in tropical and subtropical countries. The Western Ghats range is one of the hotspots they have designated. Under a project funded by the agency, the Kadar are being trained as guards to protect the huge birds. The hornbills are in an avian family characterized by large bills, some of which have big casques on top of their upper mandibles, that live in tropical and subtropical Africa and Asia. Many of the species are endangered, some critically, due to the loss of habitat as well as hunting pressures.

Amitha Bachan, a botanist who had specialized in riparian flora research, took an interest in the hornbills because of their role in dispersing forest seeds. The Vazhachal Forest of Kerala, where he works, is home to many Kadar people as well as hornbills. The CEPF considers it to be a priority area within the Western Ghats hotspot region because it is the last remaining intact riparian forest in Kerala, and it is the last spot where the Malabar pied hornbills nest in the state.

Of the 1,400 remaining Kadar people, according to the CEPF, about 850 live in the Vazhachal Forest Division. Many are now engaged, for at least a few months of the year, in wage labor for forest protection activities, such as the CEPF project.

Mr. Bachan used the grant money to begin a systematic hornbill nest monitoring survey. The first thing he did was to conduct an awareness program in the Kadar communities throughout the region. Many people asked about the possibility of obtaining jobs as forest guards. He ultimately hired 31 Kadar and gave them field training so they could begin monitoring the hornbill nest trees.

This year, the Kerala Ministry of Environment and Forests recognized the importance of the hornbill project and started funding the monitoring guards too. The ministry and the Kadar guards now take a lot of pride in the program. A local farm cooperative has adopted an image of one of the hornbills as its logo.

The CEPF story states that the guards are quite enthusiastic about their work, even though they are employed for only three months of the year. Despite that, many continue to gather data for the remaining nine months because of their personal commitments. They enjoy their jobs because they allow them to work in the forest observing wildlife. By extension, the jobs support their traditional skills and customs. They apprehended a few hornbill poachers, but even those hunters have changed their ways and are now also protecting the birds. The numbers of nests are slowly increasing, and the birds appear to be increasing their nesting range, facts which suggest that the program has been successful so far.

The news about the Kadar got even better last week with a report in The Hindu that the Kerala Revenue Minister, K. P. Rajendran, has been distributing certificates of land rights to tribal people in 10 different communities in the state. He spoke to the press after giving out the deeds and indicated that his administration planned to distribute land titles to all landless tribal families while the government was still in office.

The news report in The Hindu did not mention the tribal affiliations of the 10 different communities it named, but three of the ten are clearly Kadar villages, including Malakkappara, Vachumaram, and, predictably, Vazhacal. In all, 190 families received land titles. The Vazhachal Kadar community has been in the news a lot lately—it is located just downstream from the proposed Athirappilly Dam, and it would be mostly destroyed if the dam were to be built. It is doubtful that the new land titles would affect a decision to build a dam, but they do demonstrate an increasing respect by the government for the rights of the Kadar.