Suicides, a disturbing form of violence, have been a serious problem among Inuit youth for decades, but last week a group representing government bodies and concerned organizations released a set of recommendations that may help address the problem. 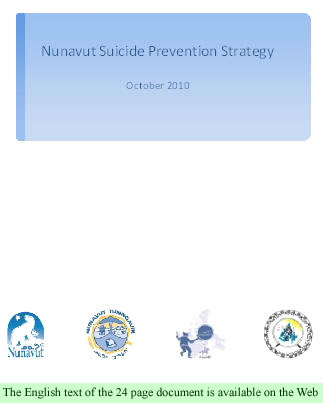 Representatives from the government of Nunavut, the Embrace Life Council, Nunavut Tunngavik, and the RCMP formed a working group in 2008 to formulate a strategy for attempting to slow the ever-increasing rates of suicides. The document released last week, titled “Nunavut Suicide Prevention Strategy,” proposes “an urgent, aggressive response” by all actors—everyone who could have some influence on Inuit young people. Tagak Curley, Health and Social Services Minister for Nunavut, presented the document to the territorial legislature.

The work cites some very disturbing facts and figures. For instance, the RCMP responded to 983 calls about suicides in Nunavut in 2009. Half of all hospitalizations for people 20 to 29 years old, reported the Qikiqtani General Hospital, were due to attempted suicides. In one community surveyed in 2008, four out of ten respondents had thought about committing suicide during the last seven days, and three out of ten had attempted it within the previous six months.

Needless to say, the suicide rate, particularly among men and boys, is many times higher in Nunavut than in the rest of Canada. Women are just as likely as men to attempt suicide—they are just not as successful at it. The report suggests that open discussions about the issue, in families, communities, and in public discourse forums, have been restrained. But it is so common that individuals often use threats of suicide to manipulate others into getting what they want.

The report argues that the roots of the problem go back to the suffering of the Inuit in the 1950s, when the Canadian government compelled the people to begin moving in from the land—sending people to TB hospitals in the South, requiring children to attend residential schools away from their homes, and so on. This historical trauma is still being passed along from one generation to the next, but, the document argues, breaking the cycle is both possible and imperative.

The document urges the partners to the report—the government, the NGOs, and other groups—to take action. The partners should provide Inuit youth with a “stronger protective foundation,” which would include campaigns against assaults, parenting classes, more access to camp experiences, and anger management courses.

The government of the territory should make a commitment to training people in suicide prevention. It should provide more and better information to all communities in the territory. It should ensure that Inuit towns receive more funding for community development programs. All of the partners should commit to supporting research programs that address suicides in Nunavut. The needs of the young people have to be addressed.

There is a sizeable literature about suicides among the Inuit, some of which has been reviewed in this website. A 2006 research article made many interesting observations and conclusions, one of which was that the people in two communities which had been investigated about their suicide rates took the matter to heart. They became much more involved in the welfare of their young people and actively promoted youth programs. The suicide rates dropped significantly.

An earlier report from 2004 placed the primary blame for the problem on the historical experience of people living on the land and the fact that they were forced to move into settled communities, an argument echoed by the report last week. It is easy, the 2004 authors wrote, “to understand how degraded, humiliated, and abused many Inuit feel as a result of their historical experiences.”

These two articles were undoubtedly not completely representative of the wide range of professional studies on the issue, but it appears as if the current investigators studied them and others like them. The English text of the 24 page document is available on the Web.